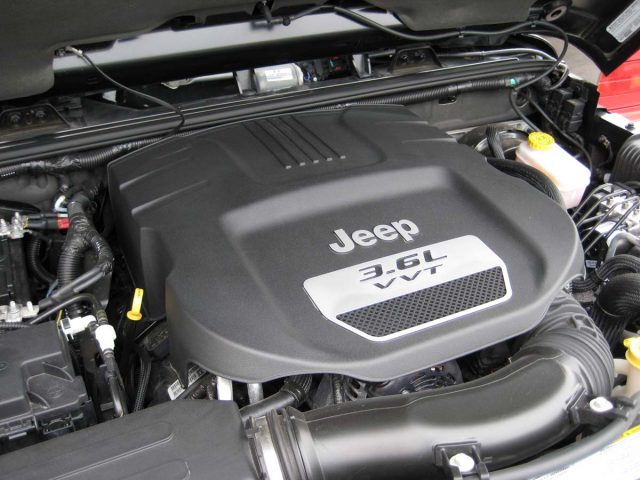 Chrylser’s Pentastar engine family has been around since 2010. Today Chrysler announced its major technical upgrade to the 3.6L V6 version.

Below are some highlights:

Briefly speaking, the enhancement is aiming for better fuel efficiency and better drivability (because of the higher lower end torque). This new V6 engine will first appear on the 2016 Jeep Grand Cherokee. Now the only major technology that the Pentastar family lacks is the fuel direct injection, let’s wait to see how FCA can catch up the game in this aspect.

Debuts in the 2016 Jeep Grand Cherokee, the world’s most-awarded SUV

All engines engineered for U.S. will be E15-compatible1

Depending on the application, the redesigned V-6 delivers fuel-economy improvements of more than six percent while increasing torque more than 14.9 percent. This occurs at engine speeds below 3,000 rpm, where elevated torque has its most profound impact on the driving experience.

Enhancements such as two-step variable valve lift (VVL), cooled exhaust-gas recirculation (EGR) and innovative weight-reduction strategies boost the engine’s efficiency and performance, all while preserving the smoothness that remains a hallmark of the Pentastar brand.

“With more than five million Pentastars on the road, we have clearly struck a chord in the marketplace,” says Bob Lee, FCA North America Vice President — Engine, Powertrain and Electrified Propulsion and Systems Engineering. “Such success brings enormous responsibility. Accordingly, we focused our efforts on improving efficiency and providing greater customer satisfaction in a package that delivers superior value.”

Improvements were measured right down to the component level. And no improvement was too small to chase.

Ultimately, the team identified the combination of features that deliver the greatest benefits in the widest operating range.

Arguably the most compelling enhancement is two-step VVL. The system is designed to remain mostly in low-lift mode until the customer demands more power; then it responds by switching to high-lift mode for improved combustion.

The result is less overall pumping work, which on its own, accounts for a fuel-economy improvement of up to 2.7 percent, compared with the 3.6-liter Pentastar’s previous iteration, named three times to the prestigious annual list of Ward’s 10 Best Engines.

The addition of cooled EGR firmly establishes the redesigned Pentastar among the V-6 elite. In addition to the obvious emissions-reduction benefits, the system further cuts pumping losses and enables knock-free operation at higher, real-world loads.

This translates to a fuel-economy improvement, on its own, of up to 0.8 percent.

The new VVT system also increases its range of authority to 70 degrees, from 50 degrees. This helps mitigate knock during hot starts and expands the operating envelope of Engine Stop Start (ESS), a fuel-saving feature that is carried over from the previous-generation 3.6-liter Pentastar.

ESS is driven by a high-speed/high-durability starter that reduces crank time for quicker restarts.

The system is regulated by algorithms, which act on the vehicle’s powertrain and chassis components.

As a result, acceleration is always aligned with driver inputs. Passive accelerator application is met with measured throttle response; hard inputs trigger aggressive starts. And there’s no waiting for either.

The same can be said for torque. More torque is delivered more quickly by recalibrating the VVT system to leverage the benefits of the new intake manifold’s longer runners.

The result is a torque boost of more than 14.9 percent, depending on the vehicle application. And this occurs between 1,000 and 3,000 rpm – engine speeds most customers see very frequently.

Says Lee: “We are particularly proud of this achievement because our engineering philosophy revolves around knowing our customers and anticipating their needs and wants. The new 3.6-liter Pentastar delivers a driving experience that is exhilarating.”

Most notably, the engine’s compression ratio jumps to 11.3:1 from 10.2:1, compared with the engine’s previous iteration.

Factor in the effect of 100-millijoule high-energy ignition coils with platinum sparkplugs and the above combustion enhancements account for a 1.5-percent improvement in fuel economy.

Particularly notable is the use of HG-R1 on the timing drive guide-faces. The new Pentastar is the first production engine to feature this low-friction material.

Form
Just as refinement is a defining trait of the Pentastar V-6 engine family, so is component design. Its integrated exhaust manifold contributes to packaging efficiencies that enable plug-and-play-type integration across a formidable range of vehicle segments and drivetrain configurations.

The new 3.6-liter Pentastar debuts on the 2016 Jeep Grand Cherokee, the world’s most-awarded SUV. The new intake manifold improves airflow, which benefits volumetric efficiency and enables a boost of up to 295 horsepower, from 290 horsepower.

For model-year 2016, FCA US powertrain engineers were challenged by the potential negative effects of incremental weight wrought by the engine’s new feature content. However, clever component redesign produced an engine that weighs as little as 326 pounds, depending on the application.

A thin-wall strategy was used to reduce the nominal thickness of certain die-cast components – without compromising the noise, vibration and harshness (NVH) characteristics for which Pentastar engines are known.

Windage-tray weight was slashed by 19 percent and front-cover weight was cut by five percent. Two-piece oil pans were eliminated, with the exception of Trail Rated vehicles.

The engine’s crankshaft also went on a diet. Its main bearings and pins were trimmed, which contributed to an overall block-assembly weight reduction of six pounds. This generates additional friction-reduction.

“Our customers have made clear their profound appreciation for the 3.6-liter Pentastar,” Lee says. “We feel the upgraded Pentastar will evoke similarly strong emotions.”

Finale
Model-year 2016 brings to FCA US showrooms a crossover that offers a drivetrain with capability no other vehicle in its class can claim. The all-new Fiat 500X features rear-axle disconnect technology that is unique to the FCA US stable of front-wheel-drive-based vehicles.

It disconnects and reconnects the rear axle – automatically and seamlessly – as needed and at any speed.

When driving conditions warrant only front-wheel-drive, the rear axle disconnects at both the PTU and rear-drive module, which improves fuel economy by reducing the parasitic loss, which occurs with conventional systems.

For model-year 2016, FCA US engines – except for the 8.4-liter V-10 that powers the Dodge SRT Viper – will be E15-compatible in anticipation of the fuel’s proliferation.

About FCA North America Powertrain
Rejuvenated when the Company was established in 2009, FCA US powertrain organization has intensified its efforts to develop engines that deliver superior performance, improved fuel economy, reliability and driving enjoyment. Since 2009, nearly half of Chrysler Group’s total manufacturing outlay (more than $2 billion) has been invested in powertrain projects.

1 Except the 8.4-liter V-10; select engines will accommodate higher ethanol blends, such as E85