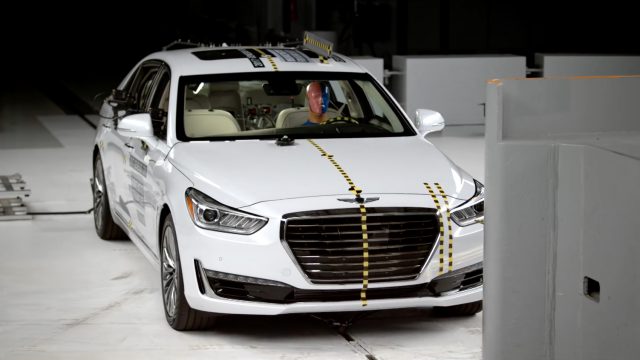 Recently IIHS published a full set of test results on the 2017 Genesis G90 and Volvo S90, including small/moderate overlap frontal crash, side impact, roof strength. This can be considered to be the first time in IIHS history (in fact previously, IIHS has also tested the Lexus LS, however only moderate overlap test result is available).

Simply looking at ratings such as poor/acceptable/marginal/good means nothing,  since the qualifying criterias for this rating system is too “loose”: two cars with the same “good” rating may have dramatic differences in their structural rigidity. Therefore, we need to look at the detailed numbers. In the following, I will present a brief review on the structural strength of the Genesis G90 and Volvo S90, based on then published IIHS data.

Although they both belong to the large luxury car sector, simply comparing G90 with S90 is unfair – the weight difference between these two models are too large. So I will compare each of them against other IIHS tested vehicles with similar weight.

Among the various results in the IIHS tests, only the side impact and also the roof strength can directly reflect the rigidity of the vehicle’s safety cage. Frontal crash test results cannot tell the whole story because the engine compartment crumple zone.

For side impact test, sedan usually performs worse than its SUV counterpart (if they are based on the same platform). Notable examples are:

Therefore, we should not use a single standard to evaluate the side impact test for sedan and SUV at the same time. However for flagship luxury sedan, its B-pillar should be strong enough to achieve a “good enough” result.

At this moment, newly designed luxury sedan should have a side impact test result better than -20 cm to enter the 1st class camp. This is not an exorbitant requirement, because there are various vehicles have been able to do that:

Therefore, both the Genesis G90 and also the Volvo S90 do not perform well in the side impact challenge (both got -18.5 cm).

The G90 that IIHS tested is weighted 4,674 lbs. For vehicles that have been tested by IIHS, I find:

We can consider the frontal structural rigidity of the G90 is very similar to the Mercedes GLE, and obviously worse than the Touareg and X5.

Roof strength of the G90 reaches 23,044 lbs, which is a really good result. This is also the best roof strength I have ever seen for all IIHS-tested, non-SUV vehicles.

Generally speaking, given G90 is a sedan, except the side impact part, its structural strength can be considered to be 1st class.

Other test results are best possible among sedans in the same weight range, especially the moderate overlap frontal test – the result is astonishing.

So regarding the passive safety, the Volvo S90 is much ahead of its competitors, although it could have been done better in the side impact section. 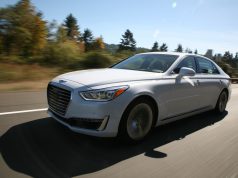