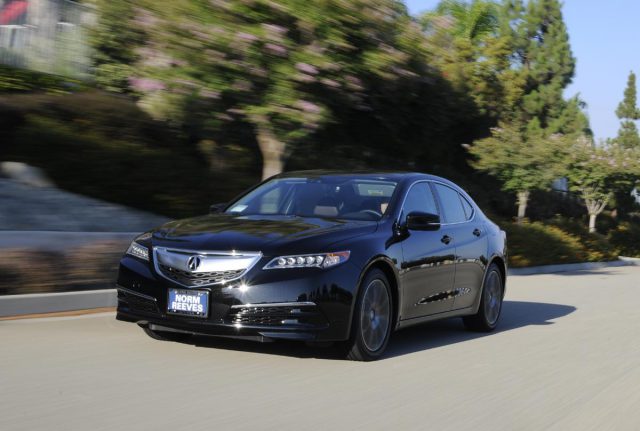 Entry-level front-wheel-drive luxury sedan is a relatively large market segment in the US, with major competitors such as the Lexus ES, Lincoln MKZ, Volvo S60, and also what we have recently tested: the Acura TLX.

No doubt the current champion of this segment is the Lexus ES. Judging from the mechanical aspect, the Acura TLX in fact provides the best value. However the inconsistency between the mechanical quality and its sales volume suggests there are must be some reasons hiding behind this. One thing to clarify: the sales of the TLX is OK currently, it is just not the best one in the market.

From my experience, the biggest factor that is dragging TLX’s market performance is: Honda builds its sibling (the Honda Accord) so good that it makes the TLX to be perceived as the “upgraded Accord” only, which in fact is incorrect.

In the following review, I will go over the TLX thoroughly. I bet (and I also hope) reading this article can lift your understanding of the Acura TLX to another level. 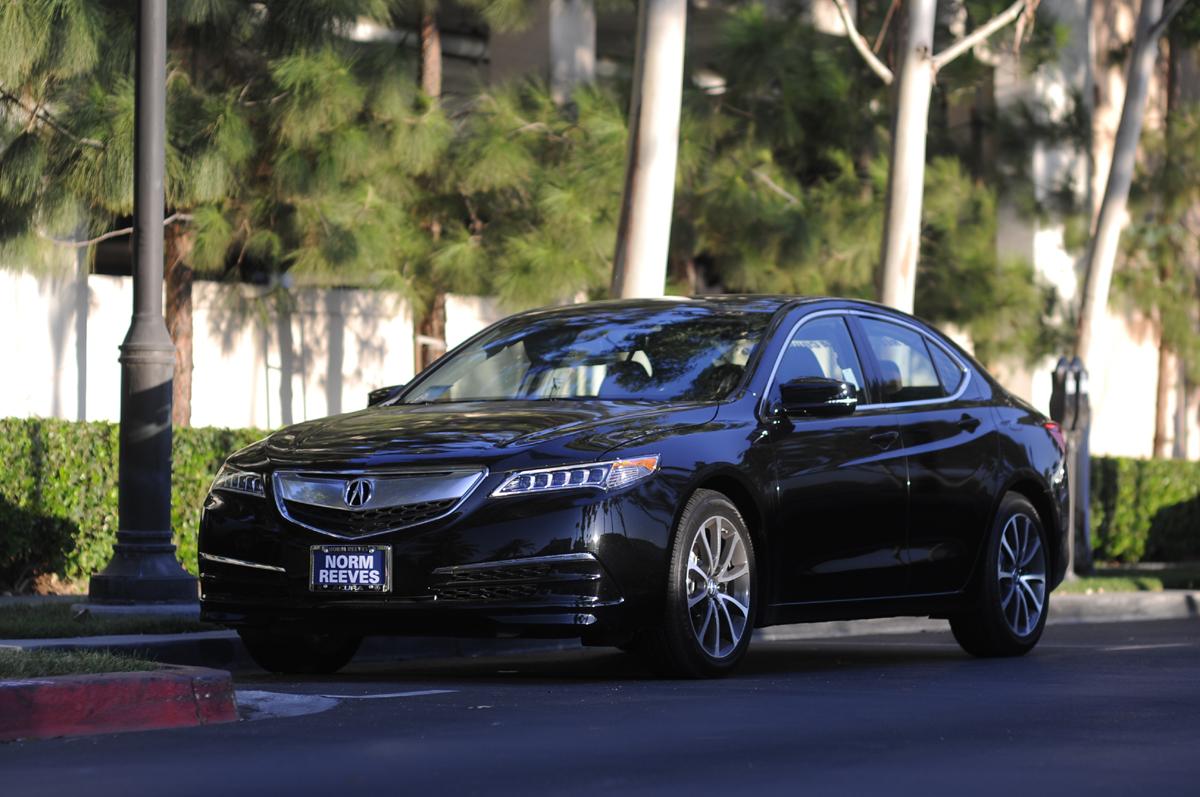 TLX is a completely new model starting as the 2015 model, its predecessor is the 4th-gen TL. Instead of growing into a bigger size (which is a typical act for some auto makers nowadays), Acura wisely made the TLX smaller: it keeps the same wheelbase as the previous TL, but is smaller in every exterior dimensions (length/width/height).

The TLX looks more sleek and athletic than the previous TL, however the tradeoff is the somewhat limited headroom and legroom for the rear seats.

One signature feature of the TLX is the “Jewel Eye” LED headlights, which really makes the TLX stand out from the crowd and it is offered as standard. Acura is quite generous in the lighting aspect, since currently most of other brands usually charge a hefty premium over the LED lighting option. 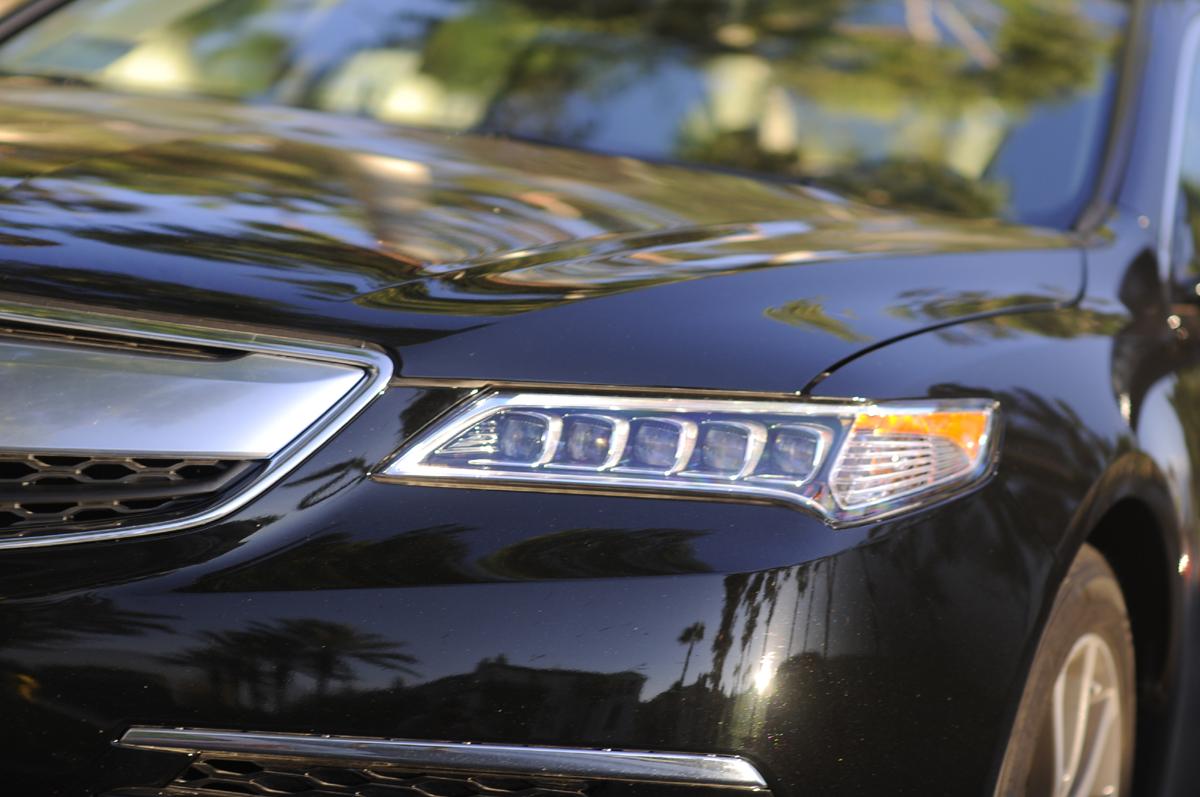 Although sporty and performance is one of the marketing theme for TLX, Acura hides the dual exhaust tips under its rear bumper, which makes it totally invisible unless you are kneeling down to checkout the TLX’s underbody. 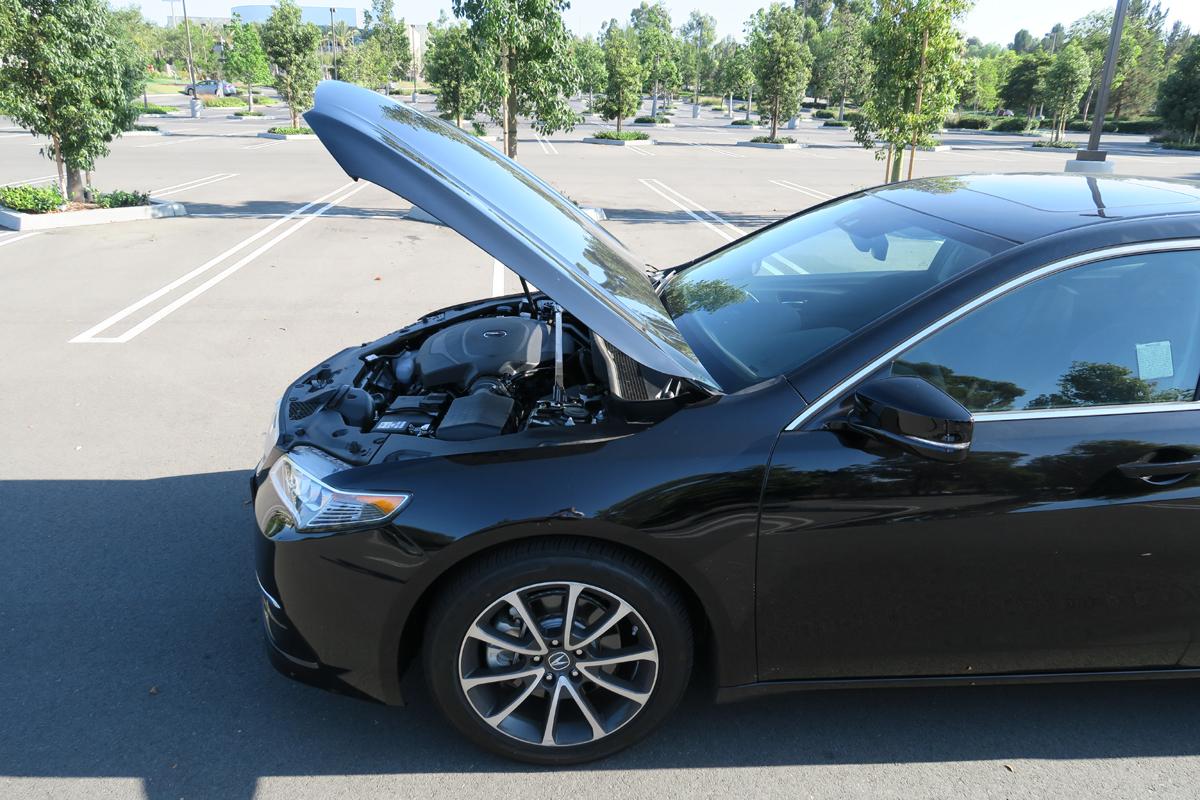 Based on a FWD platform, Acura moves the front axle a little bit forward in the engine bay, which increases the distance between it and the firewall. This provides the TLX a distinct steering feel more close to driving a RWD car.

You may think TLX is simply a luxury Honda Accord, however you are wrong. In fact for TLX’s body in white, only 30% of the components are shared with other Honda models; the rest of the 70% are either modified, or completely new designs. 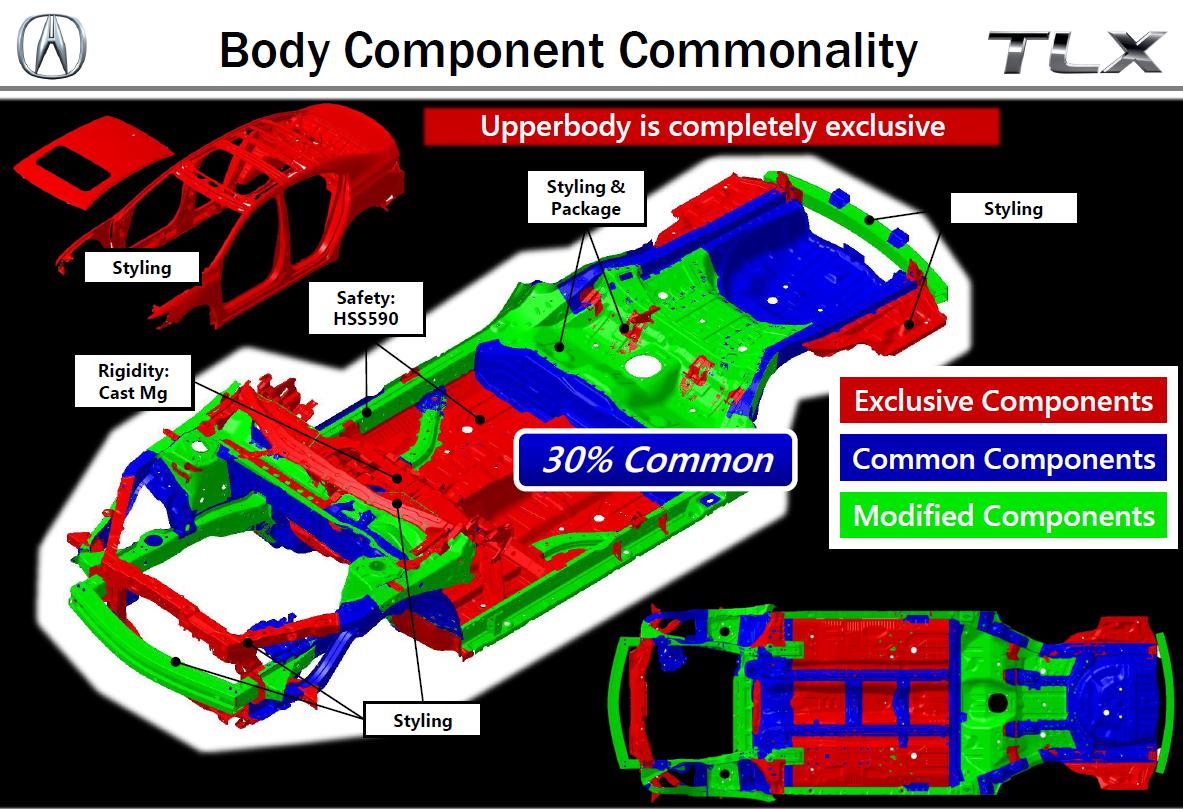 The TLX’s car body exhibits higher rigidity and also crashworthiness than the Accord, which you can tell from multiple IIHS tests, especially a 28% higher roof strength on the TLX. You may have known TLX did not get a very good result in the IIHS small overlap test. From Acura’s internal analysis, that is because oversight in the wheel rim’s design cause the front part of the rim broke up during the test, and the rear part crashed directly into the lower A-pillar. This leads to a bent front section of safety cage. 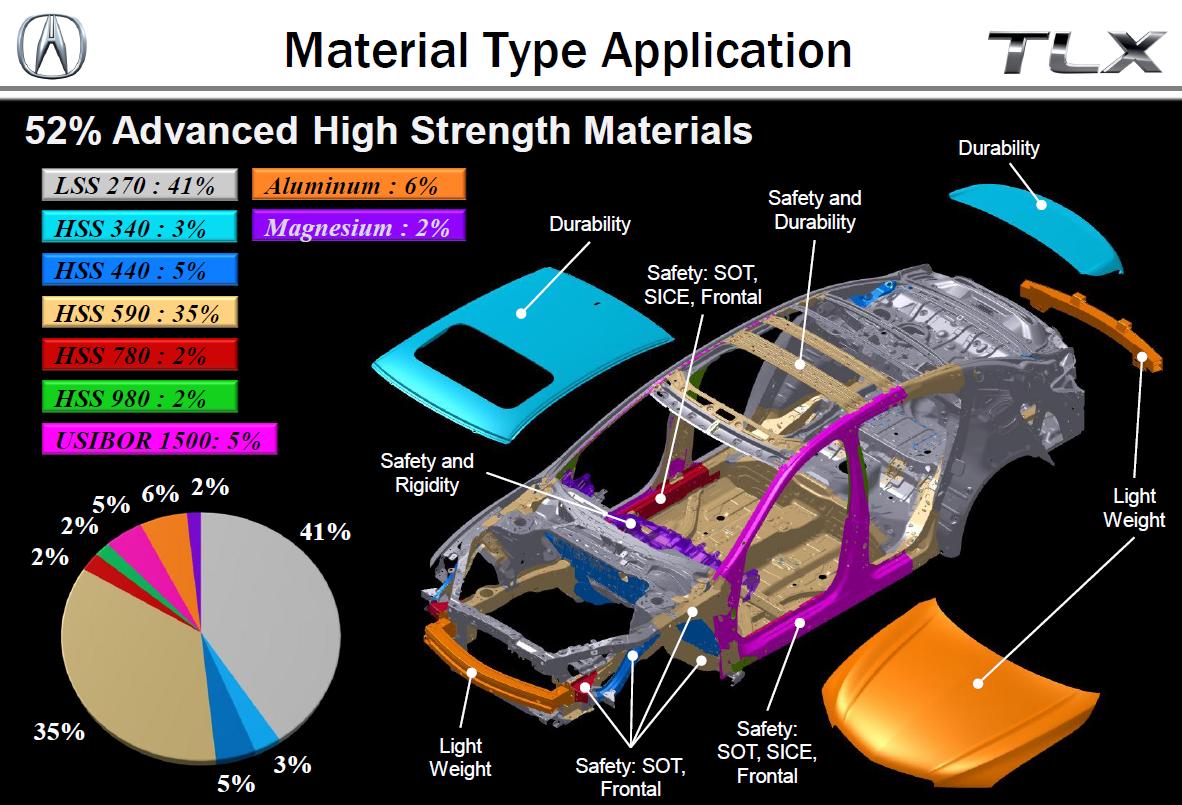 The torsional rigidity of the TLX is exceptional, which you can tell from its ride quality, and also how the suspension/car body filtering out the harsh part of the impact when driving on roads with lots of potholes and broken pavement. 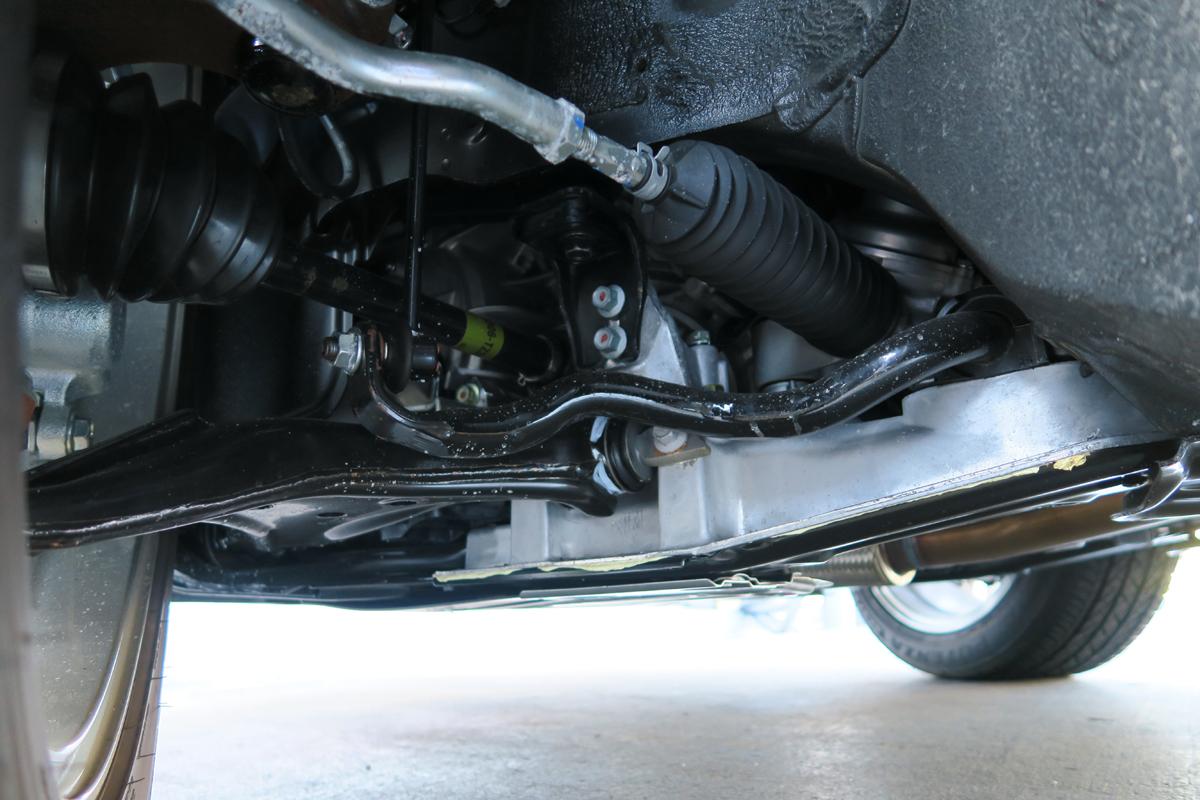 The TLX’s front sub-frame is quite interesting. Instead of made with aluminum alloy or steel, it is made from the hybrid material of half-aluminum and half-steel. The front section of the sub-frame is made with steel, however the rear part is made with aluminum. These two sections are combined together using a technology called “friction stir welding”, and is used on the lower horizontal faces of the cast rear transverse member of the front sub-frame, to add a sheet steel closure for the box section. The benefit of this design is to reduce weight for the structural sections and also provides good energy absorption to handle forward collisions. 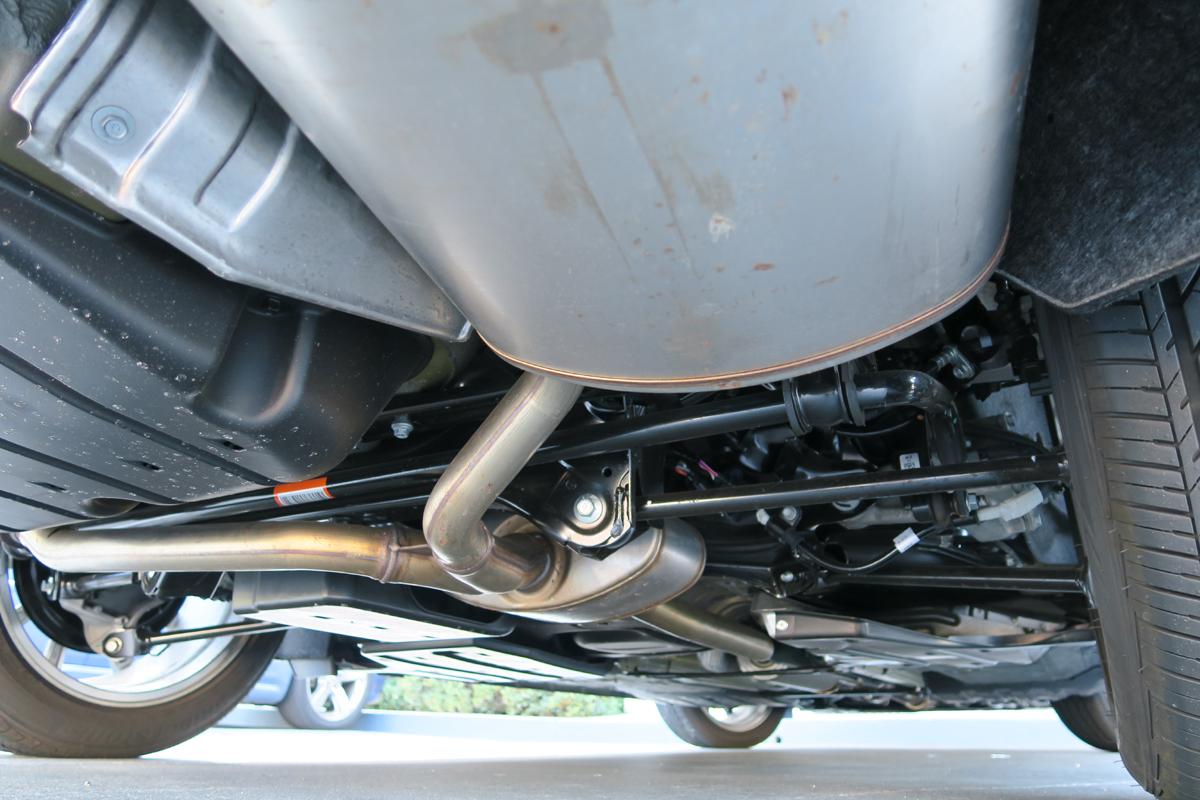 Speaking about the suspension system, TLX uses MacPherson strut for the front and multi-link for the rear. One thing worth mentioning is: Acura offers rear wheel steering (“P-AWS”) as a standard feature on the TLX. It is usually hard to notice this system at work under normal daily driving conditions, however you may notice the TLX is extremely stable on highway cruising, which is partially attributed to this P-AWD functionality.

The interior is where the TLX’s weak point is. Certainly, the material and build quality are not bad at all, and generally speaking they are at or above average. 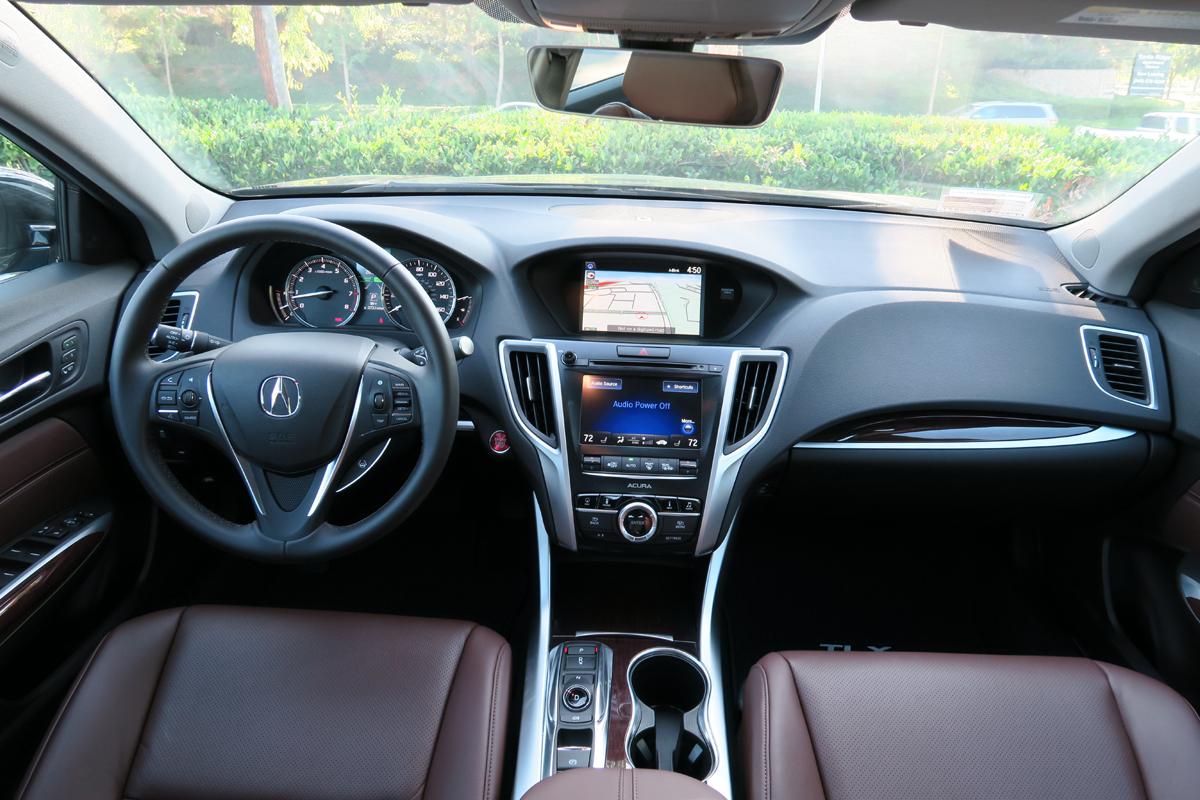 However, the issue is Honda also makes other models with the Honda badge too good: jump in a fully loaded Accord, you will find the material quality is almost as good as the TLX. Therefore this runs the risk of hurting the TLX’s “luxury feel” in most consumers’ minds. 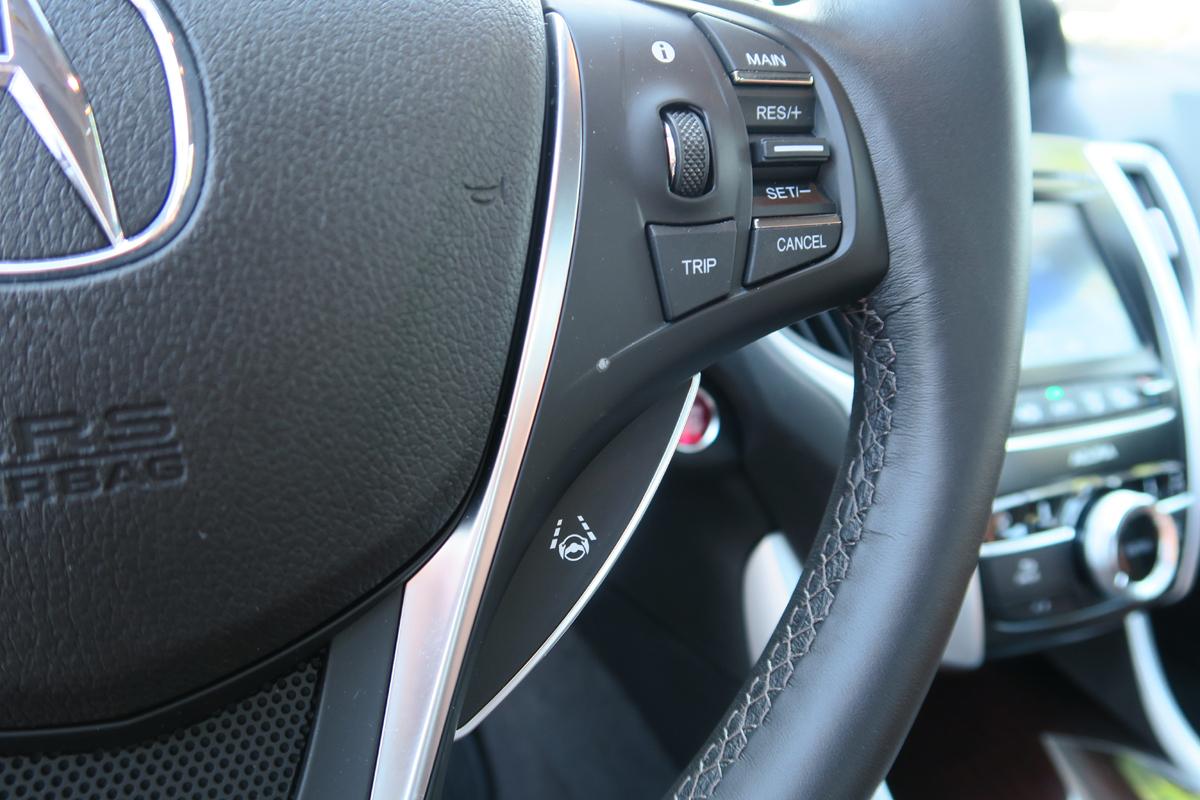 The 2015 TLX comes with the fancy lane keeping functionality, Acura calls it “LKAS” (Lane Keeping Assist System). We have tested it extensively. While on highway with nice conditions (straight or roads with slight curvatures, with clear lane markings) this system can successfully help steering your car to keep it within the lane, it sometimes behaves weirdly if the road condition is less than ideal. For example, if a 2-lane highway is gradually widened to 3-lanes, than the LKAS seems clueless to not knowing which lane the car should keep; and also even in a straight lane, the LKAS still turns the steering wheel slightly and also frequently, if you did not hold the steering wheel firmly and let the system steer for you, this will cause a notable “floating” feel on the highway.

Besides the LKAS, TLX has all major electronic features which is common on cars of this level, I feel it is adequate when compared with other competitors. 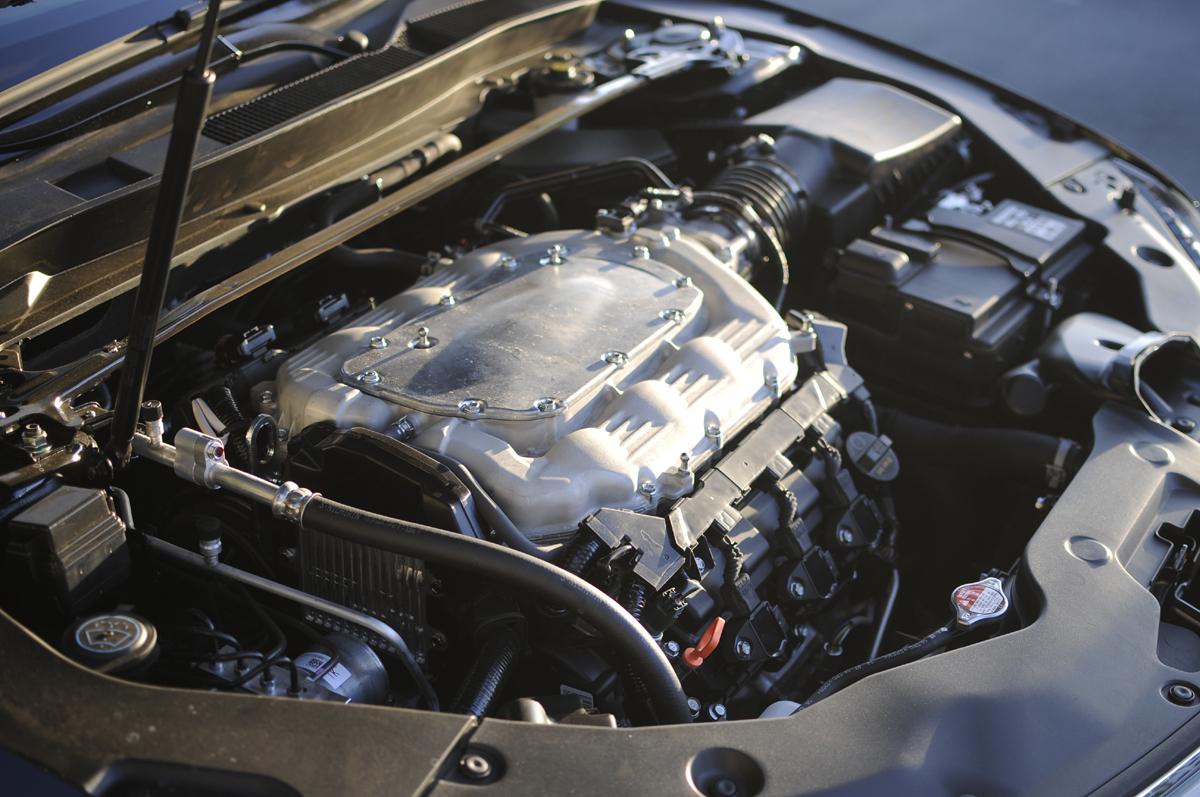 Do not be confused by the word “VTEC”. Within Honda, the “VTEC” terminology has different meanings on different cars. Sometimes the difference is quite dramatic. For example the “i-VTEC” used on the K24 four-cylinder engine is not the same as the i-VTEC we see on out TLX test car.

For the K24 4-cylinder engine, it uses DOHC cylinder head, and has VTEC on its intake valves (timing and lift are both adjustable). The letter “i” means the intake timing can be adjusted continuously, thanks to an additional adjustable cam sprocket.

The reason for this arrangement is because of the cylinder deactivation feature (Honda names it “Variable Cylinder Management”, “VCM”). The J35Y6 engine will switch to 3-cylinder mode under light load. Therefore the purpose of the extra stages on both of the 2nd bank’s intake/exhaust valves is simply implementing the cylinder deactivation, that stage is not for adjusting the timing/lift, but acting as a switch to turn on and off of that bank.

So you see, the J35Y6 engine does not has the feature of adjusting timing/lift for the exhaust valves. The “i” in the “i-VTEC” here means the cylinder deactivation functionality.

Because the engine is running in 3-cylinder mode when it is idle, you can feel the slight shaking through the steering wheel when you are stopping at the red light. There is no way to eliminate the 3-cylinder mode vibration mechanically, what Acura can do is to beef up the engine mounts to filter out most of the vibration energy. 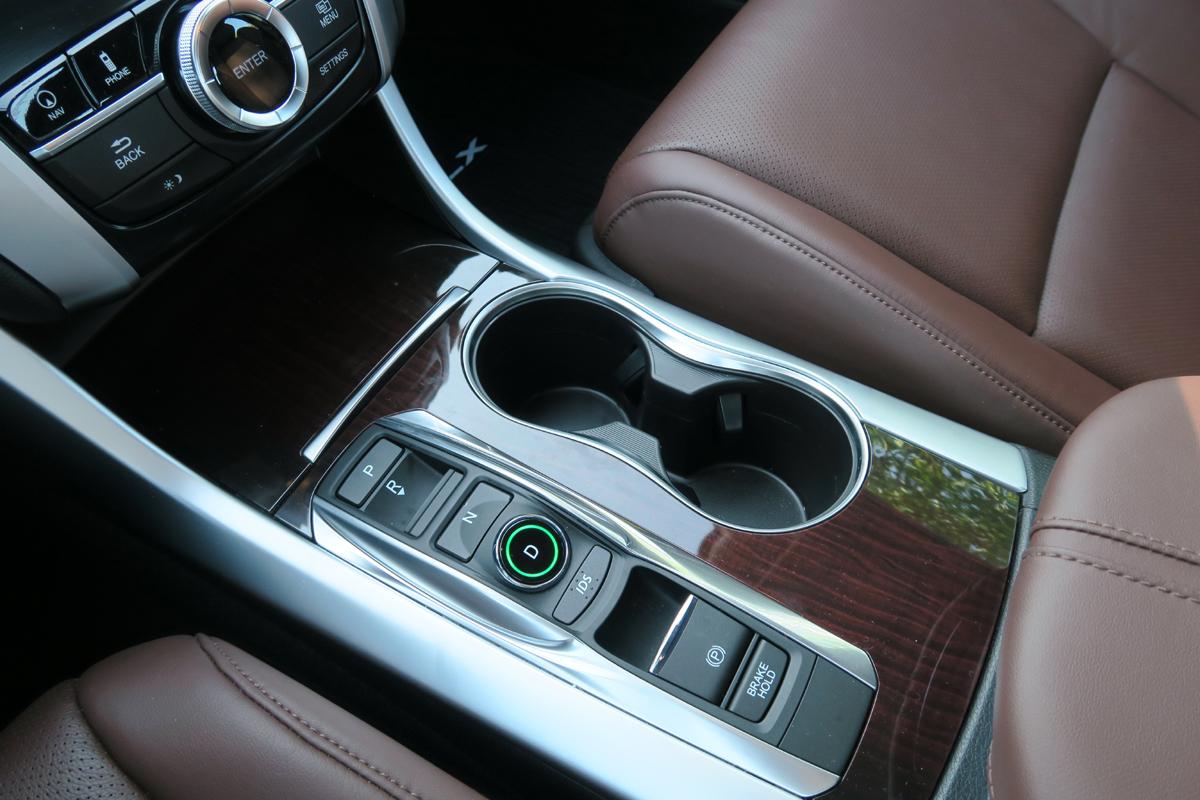 The ZF 9HP has been criticized for its unsmooth shift quality for some specific gears, due to the usage of two dog clutches, which will cause a complete power delivery interruption during shifting. However, Acura has done a nice job in the ECU control programming to mask out the effect, and during our test drive we seldom noticed any uncomfortable shifting patterns. 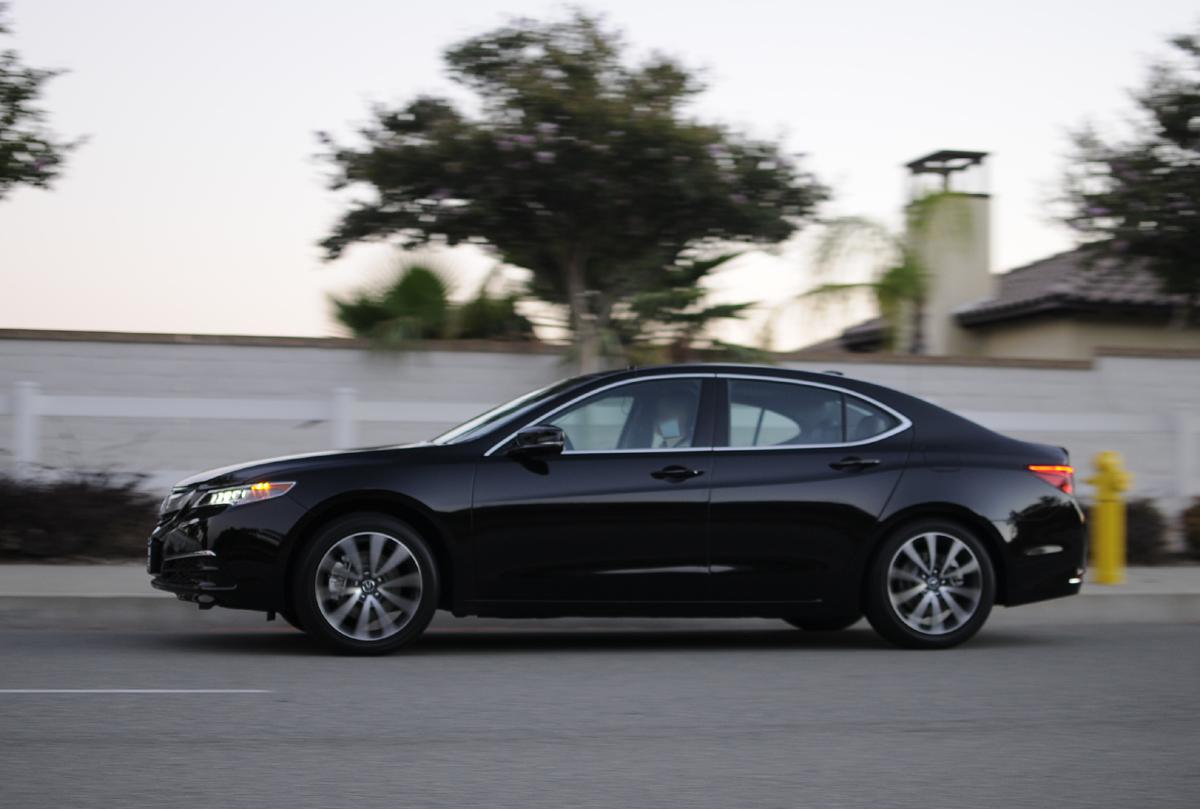 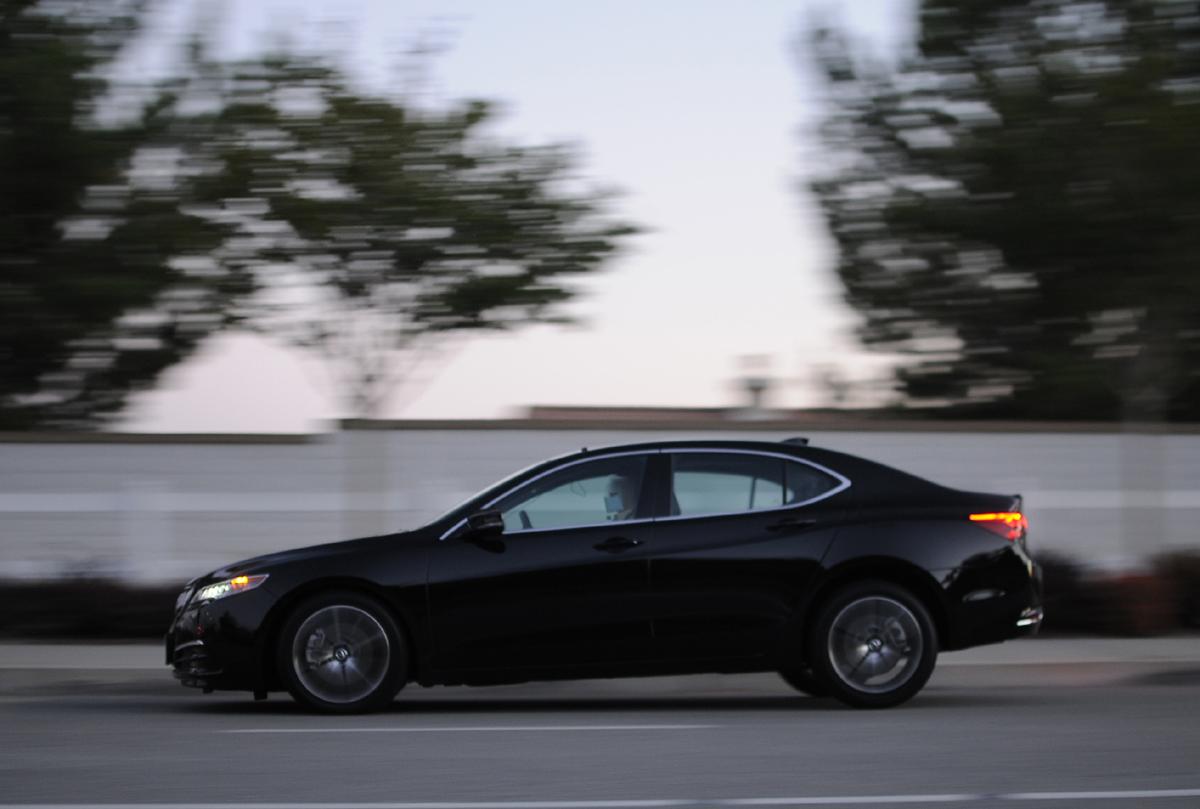 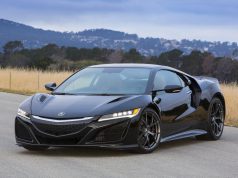