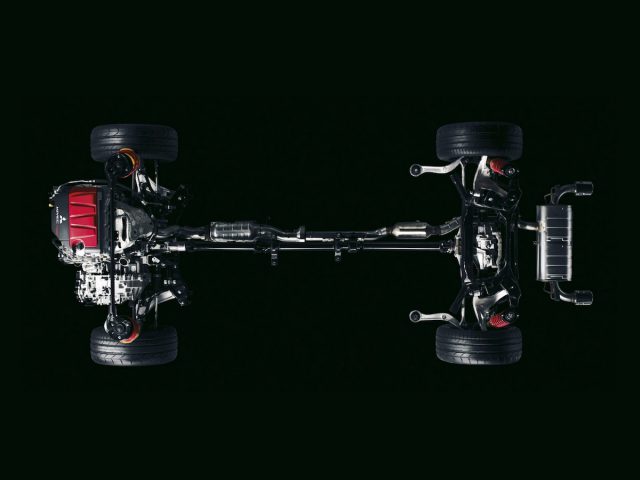 Believe it or not, the 10th-generation Mitsubishi Lancer Evolution has one of the most complicated AWD systems in history. Specifically, it is the most advanced AWD system implemented on the transverse FWD platform. 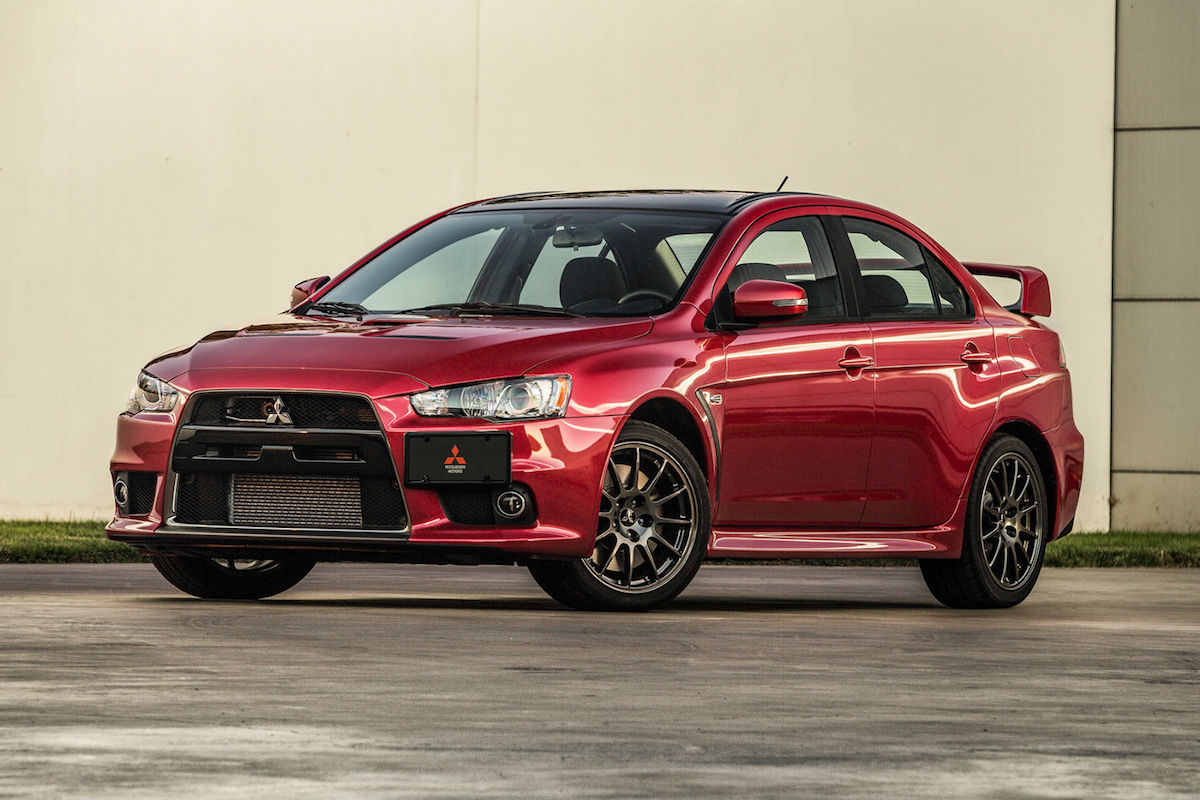 Major reason is: it has a “real” (gear-type) front, center and rear differentials, and all differentials have some sort of mechanical limited-slip or active torque vectoring device built-in. In the following I will provide a detailed review of this system.

Mitsubishi names its AWD system on the Evolution X “S-AWC.” Below is the illustration of its major components.

The S-AWC consists of:

Such design is common in this sector, other competitors such as the Ford RS and Civic Si also use the same approach.

Please note that the multi-plate clutch on the right hand side is for the center differential only, it is not relevant to the front differential.

The S-AWC’s center differential is integrated into the transmission casing. 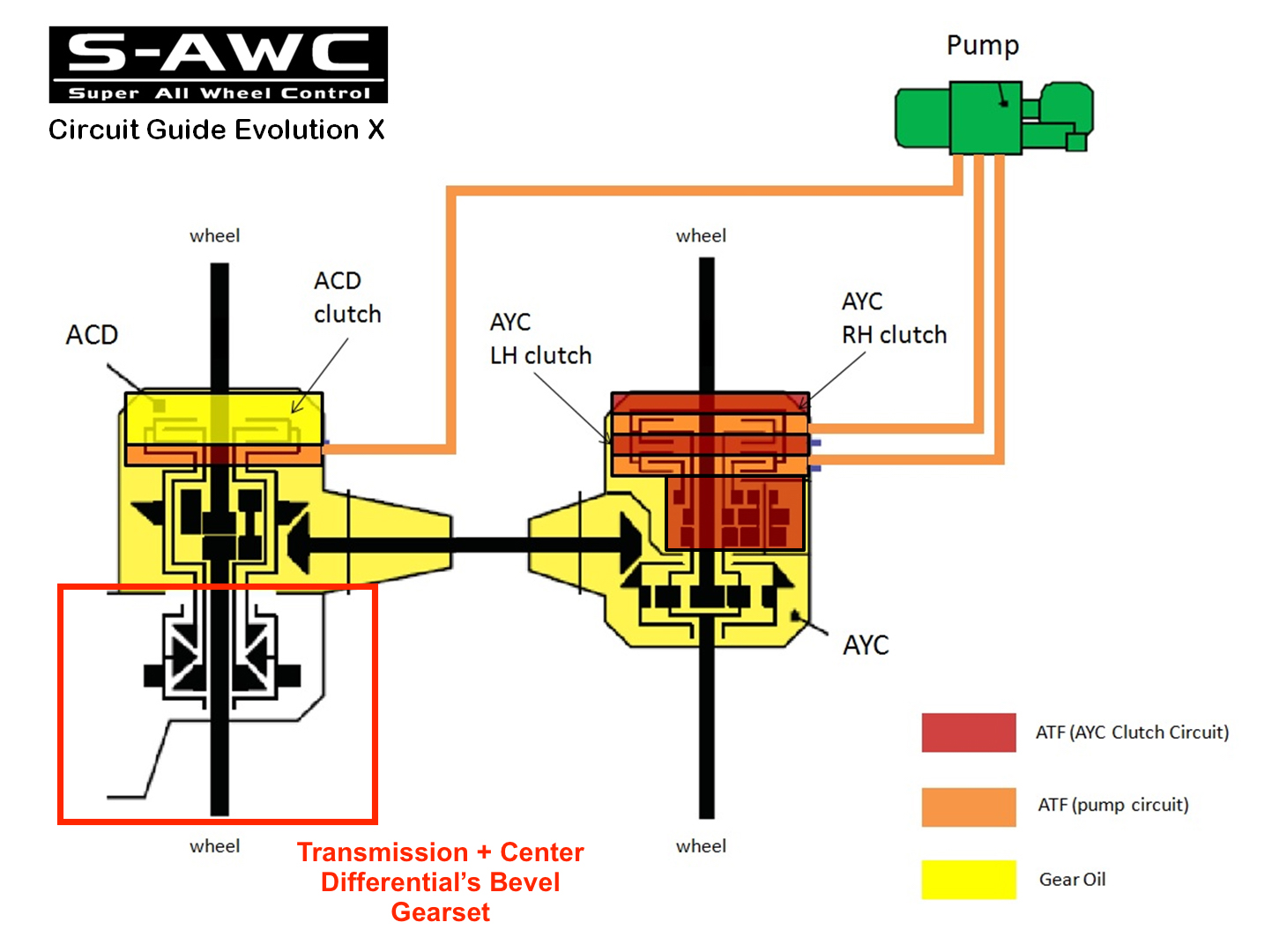 The cutaway illustration below is for previous Evolution generations only, but the Evolution X’s transmission + center differential layout is very similar: 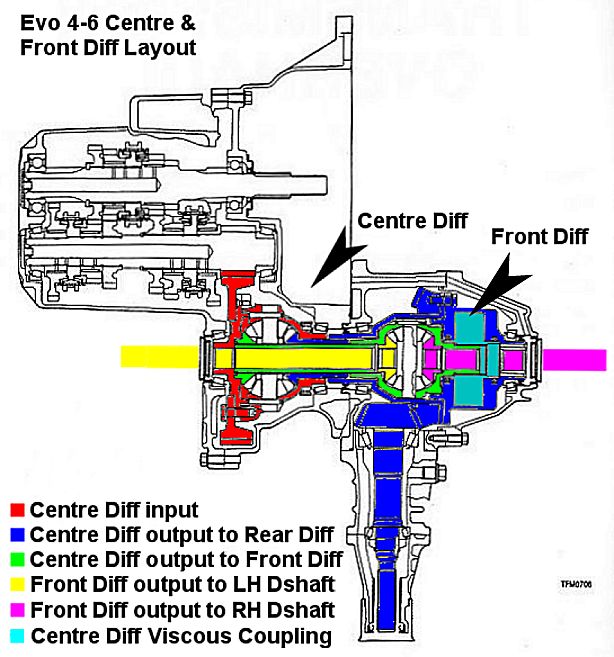 The center differential’s limited-slip clutch pack is installed together with the front differential, as shown in the below image:

The bevel-gear type central differential is set to distribute torque evenly to the front and rear axles by default (non-slip case); at the same time, it also employs an electronically-controlled clutch pack to modulate its front/rear torque distribution (% of lock). All of these are tightly integrated with the front differential gears, I highlighted the key components to give you a better idea of the design: 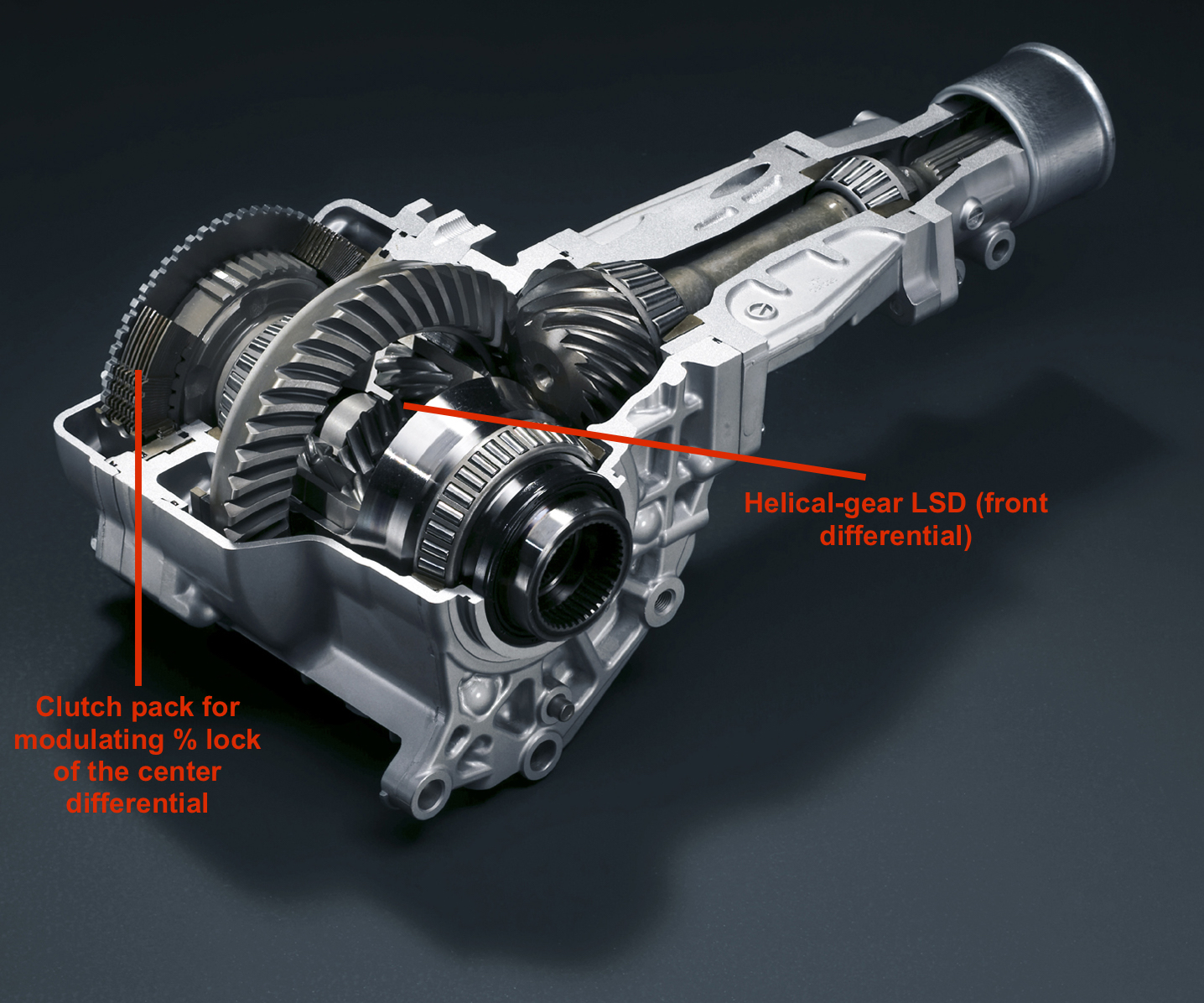 To understand how to utilize the clutch pack to implement front/rear torque lock %, please note that the static friction between the input/output clutch plates determine how much force (or power) can be transferred through. For a given static friction value, if the transmitted power tries to exceed that limit, the two clutch plates will slip, therefore no more power can go through.

For example if we require the lock % to be 30% front and 70% rear, and at a certain moment the engine is outputting 100 hp, the static friction in the clutch pack should be accurately adjusted to transfer 30 hp to the front, no more and no less.

To adjust the static friction within the clutch pack, please remember the following formula:

Since the coefficient of static friction of the clutch plate material is pre-determined and fixed, the ECU can electronically control the pressing force (through the hydraulic pump) to modulate the static friction between the input and output plate.

The S-AWC’s rear differential distinguishes the Lancer Evolution from its competitors – because it is an active torque vectoring differential. It is called “S-AYC” in Mitsubishi’s official language.

In fact, Mitsubishi is the first auto maker in human history to offer torque vectoring differential in a production car (4th-gen Evolution, 1996). Below is the cutaway illustration of the S-AYC application on Evolution X’s rear wheels. 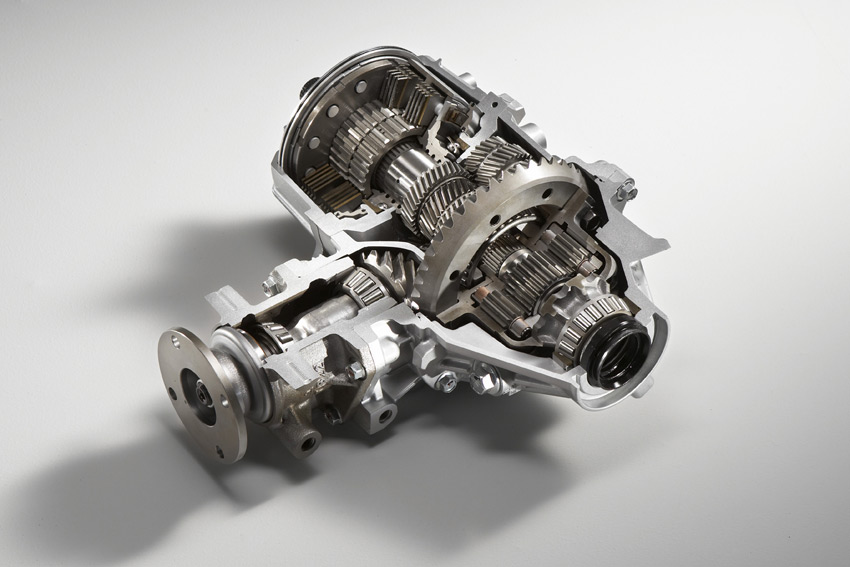 Please pay attention: the S-AYC is fundamentally different from the limited-slip differential.

For a limited-slip differential, its purpose is to transmit more torque to the wheel which rotates slower (because a slipping wheel usually rotates faster). However, during cornering the outside wheel (which rotates faster), is the one that needs more torque instead. Therefore, a “normal” limited-slip differential will more or less do more harm than good to the vehicle’s cornering performance.

Active torque vectoring is another story. Mitsubishi’s S-AYC is a clutch-based mechanism. The rear left/right wheels connect to a set of clutch plates respectively, we call it the “output plate” in this article. The drive shaft (extended from the center differential) is connected to another set of clutch plates, the “input plate”.

When making a turn, the outside wheel rotates faster while requiring more torque to help finish the turn quicker and make the car’s handling more nimble. However, the drive shaft (also the input plate) rotates slower simultaneously.

This prompts us to something that has two different gear ratios, and this is how the planetary gear set comes into play for the S-AYC differential. 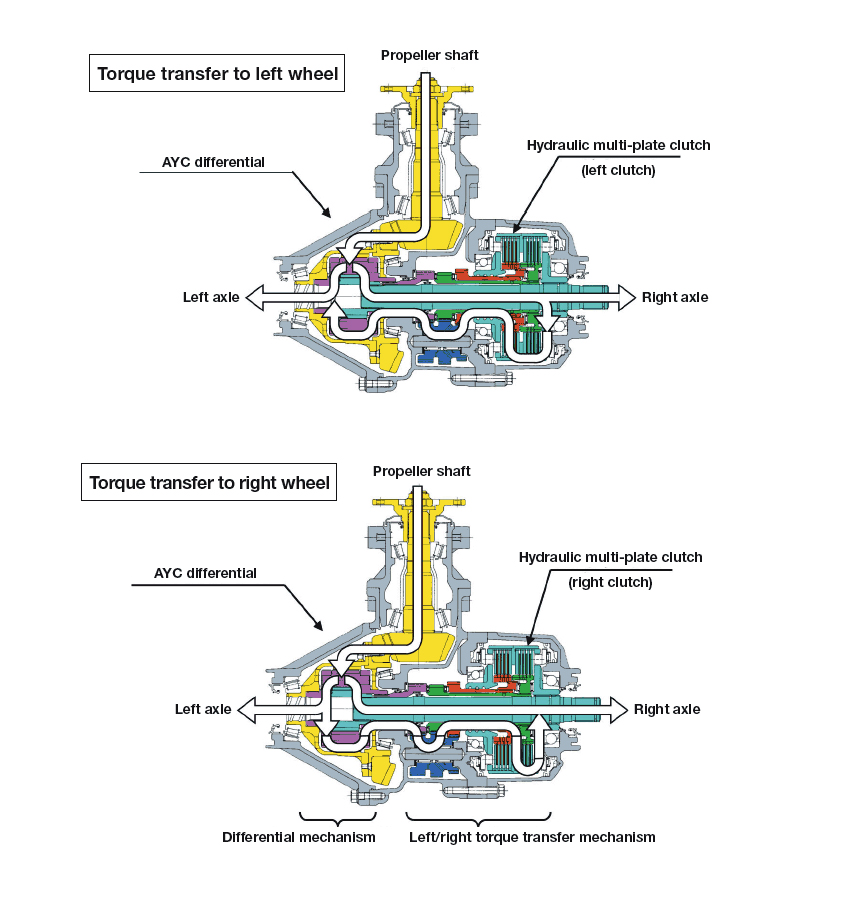 This allows the S-AYC to distribute more torque to either left or right wheels under any circumstance (hence the name “active”), which is the major difference between active torque vectoring and LSD.

Currently only the Subaru WRX STI’s AWD system can be comparable to the Evolution.

For a detailed explanation of the Subaru WRX STI AWD system, please read our previous article:

It is truly unfortunate that Mitsubishi has discontinued the Lancer Evolution after the 2015 model year. If you want to own a masterpiece that represents the apex of the production car-based AWD system, you should get your hands on one while you still can, as it is unlikely that there will be something as good as the S-AWC in the near future.