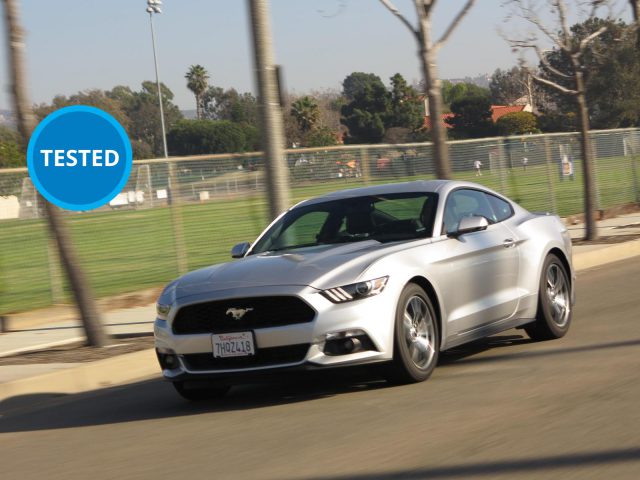 2015 model year is a whole new start for the Ford Mustang. One major reason: it finally abandoned the archaic live-axle rear suspension, and replaced it with a modern independent, H-arm suspension. 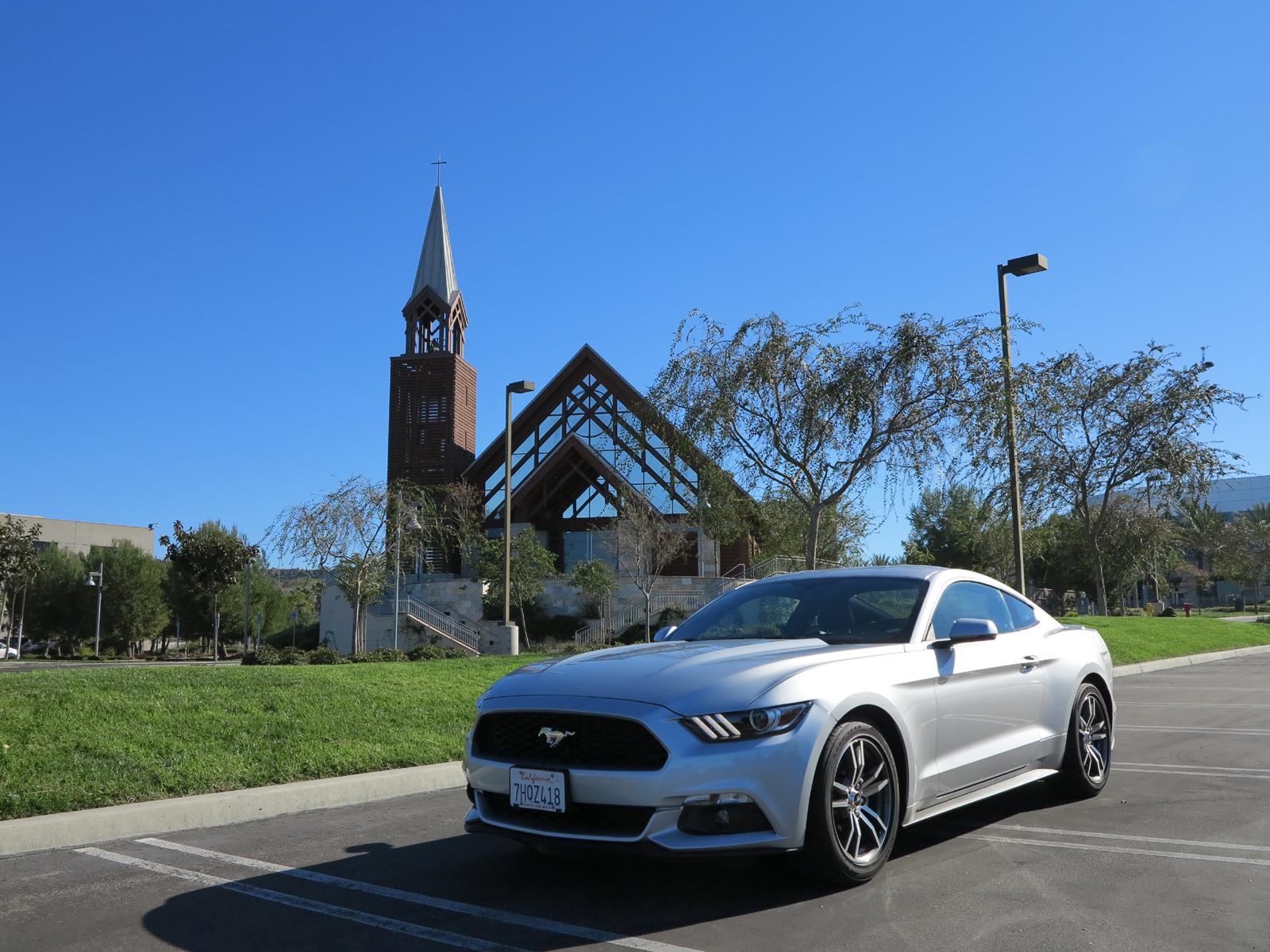 There are some other points worth mentioning. For example, the new 2.3L EcoBoost 4-cylinder engine finds its way into the Mustang. Although historically speaking, this is not the first time that a 4-cylinder engine was used in the Mustang family, it is still a risky move to put an engine with less than 6 pots in a pony car nowadays, before market reaction proves it.

Fortunately, as of today the decision of using the I4 engine in the Mustang seems to be successful.

The Ford Mustang is categorized as a Pony Car (for the V8 GT trim, you can also call it a “Muscle Car“). One unique attribute of the Pony Car is: it has the highest HP/MSRP ratio. In another word: you can get the highest power using the least money. Although pony car has evolved a lot in the past several decades, this characteristic never change.

How is the latest evolution of the Mustang going? In the following section, I will present a brief review on our test vehicle: the 2015 EcoBoost Mustang. 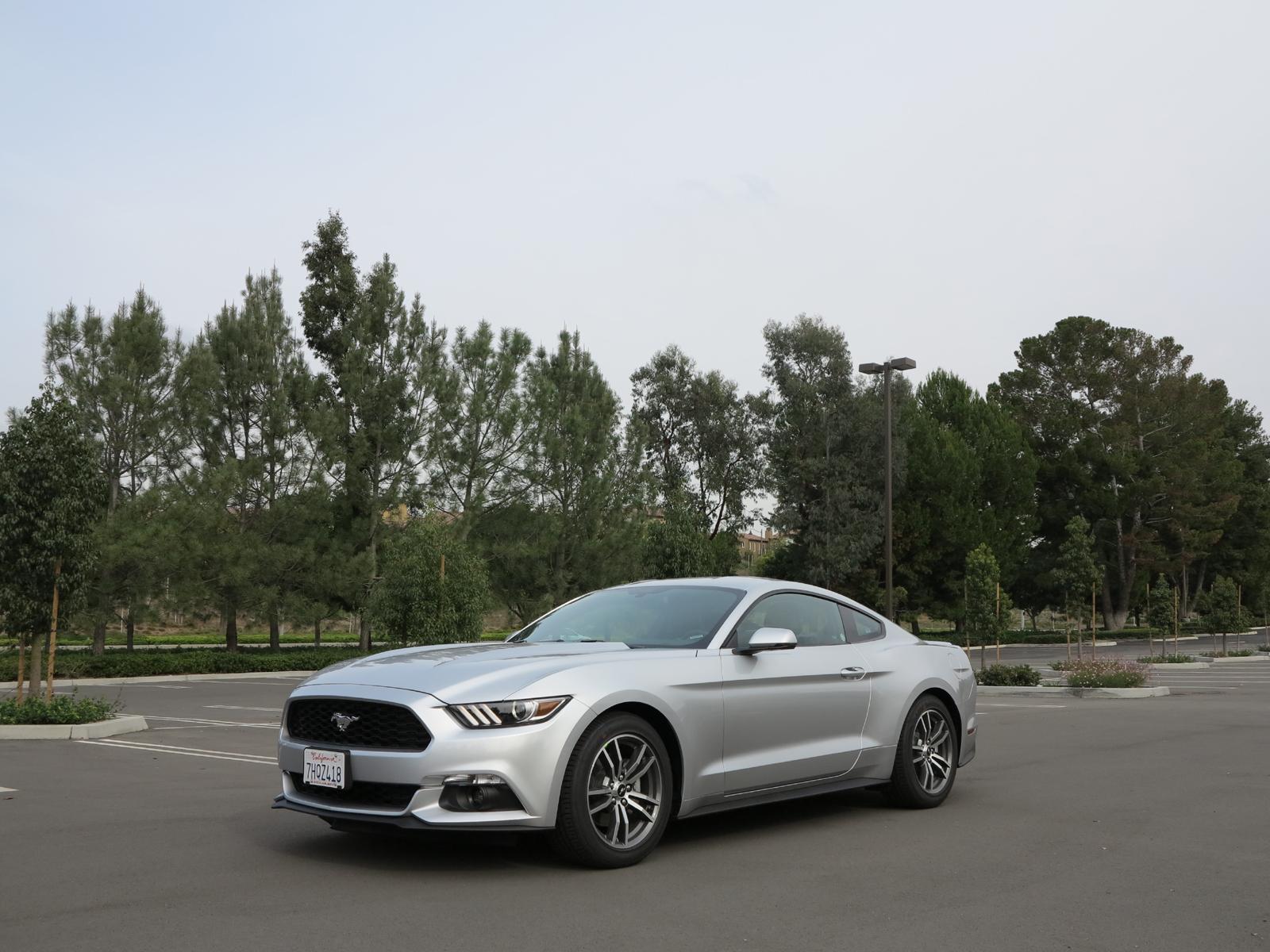 As you can see for yourself, the new Mustang becomes slicker than the previous generation. It is less “bulky”, and conveys a much stronger “muscle” feel to the audience. The elongated engine compartment and also the passenger cabin sitting far away from the front wheels, all suggest the Mustang’s RWD platform.

The exterior looks plays an important role for Mustang in the market. Since the other competitors now all have similar HP output, sometimes the only force that leads to a consumer’s final decision is simply the car’s appearance.

According to Ford, it takes the design team three full years to finalize the exterior design, a longhaul journey, but worthwhile. From my point of view, currently the Mustang is arguably the best-looking pony car in the sector.

Stepping into its cabin, you may get a faint impression that you are sitting in something that reminds you of a WWII aircraft cockpit. The aviation theme is mainly constructed by the details, shapes and layout of the gauges and switches: the “Ground Speed” letter printed on the speedometer, the plated toggle switches at the bottom of the center dash, the round AC vent on top of the dash etc.

Although most of the interior panels are made of soft plastic, it will not give you a premium luxury feel. This is within my expectation: cost, pricing and market focus means it is impossible to have all good stuffs within this price range. The cabin looks cool, that is enough.

Driver and front passenger seats have ample spaces, while the rear seats are pretty cramped; of course this is not an issue at all for Mustang – since no one buying a Mustang will care about the rear seats.

The Mustang also has some fancy and nice electrical gadgets and features. For example you can pick your own interior ambient lighting color; and also there is a tiny projector under the side view mirror cover, which casts the famous pony logo onto the ground at night.

The Mustang will not be successful without its mechanical aspect, so in the next section, let us focus on its chassis and powertrain.

The car body of this new generation Mustang has noticeably stronger rigidity. We had a brief interview with Ford SVT’s department head Mr. Jamal Hameedi during the LA auto show, he mentioned the torsional rigidity of the 2015 Mustang is around 27,000 Nm/deg. This is not exceptionally high, however during the test drive, I do not feel any sign of body twists or abnormal vibration due to insufficient rigidity, when the car hit a pothole or broken pavement gaps.

One big change for the new Mustang is its rear suspension becomes independent, compared to last-gen’s live-axle suspension. The rear suspension is borrowed from the Ford Fusion, it is the H-arm design.

The H-arm structure can be traced back to the double wishbone suspension. Since the rear wheel does not require steering, therefore the upper wishbone can be simplified as one control arm, and the lower wishbone shapes like the letter “H”. However this is not optimal, for example the camber will change quite a lot when the wheel is bouncing. Therefore, automotive engineers usually take this measure: they disconnect one joint of the H-arm, thus releasing one degree of freedom; next they add one more control arm to restrict that degree of freedom. Mustang is using exactly the same approach.

The advantage of replacing the live-axle with this independent suspension is obvious: you can feel the Mustang’s tail is so stable, that it feels like the tire is glued to the road surface.

However, since Ford also takes consideration that some buyers like to mod their Mustang, the engine is located a little bit forward in the engine bay, which leads to a suboptimal front/rear weight distribution of 53.5%/46.5%. Therefore when you are making a sharp turn, the Mustang feels nose heavy – not as serious as FWD cars, but you definitely know the weight distribution is in the play.

The 2.3L 4-cylinder turbocharged engine used on the Mustang is developed from the previous Mazda L engine family. For Mustang’s application, this engine is equipped with most of the modern features, such as all aluminum block, fuel direct injection, twin-scroll turbocharger. One thing worth mentioning: despite using cylinder sleeves, Ford applied the Plasma Transferred Wire Arc (PTWA) thermal spraying technology, creating a thin layer of iron on the cylinder bore. This helps to save the engine’s weight. 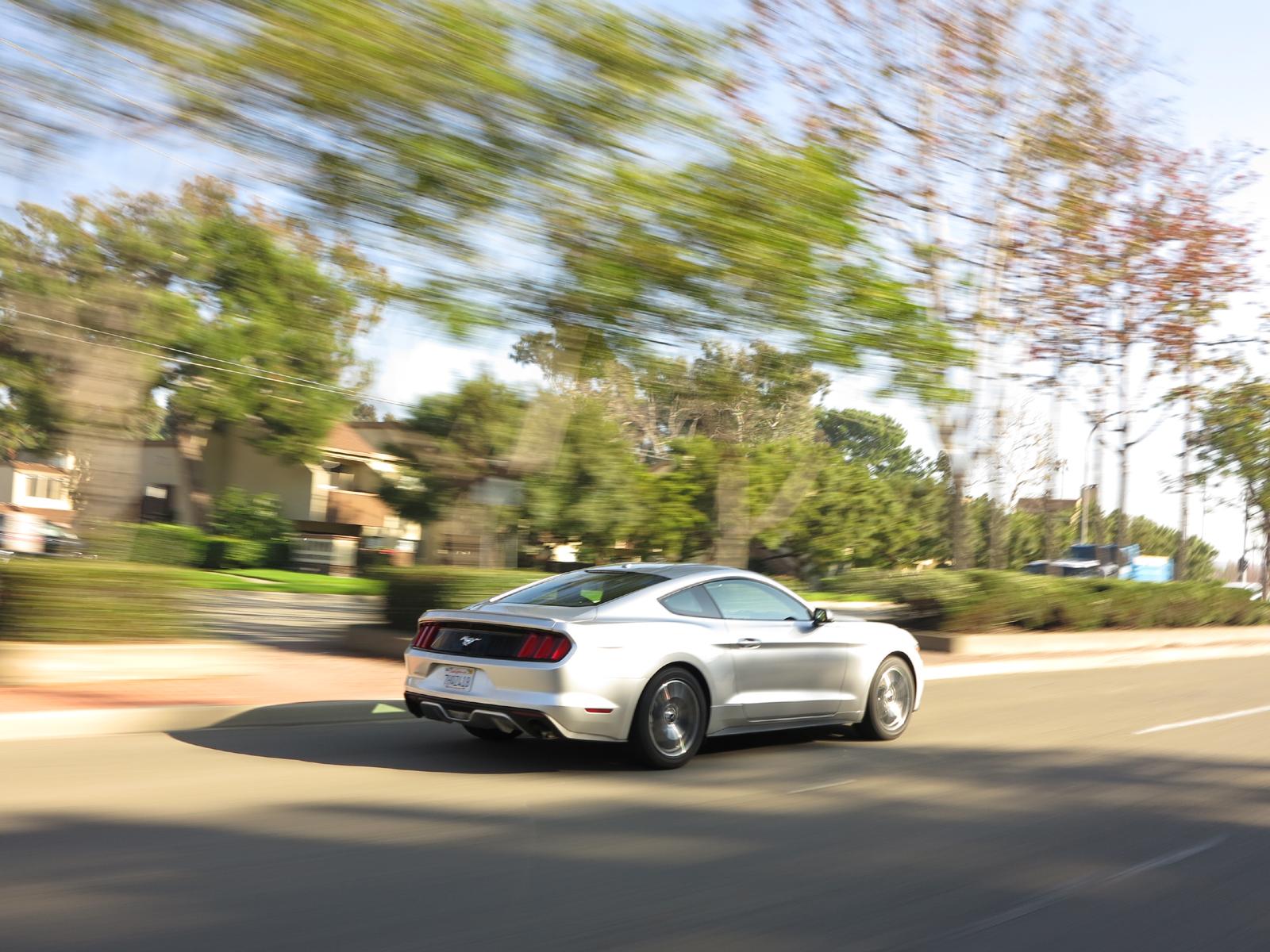 The Mustang feels agile on the road. Unlike the previous generation, you do not need to worry about losing traction when you push it hard – thanks to the independent rear suspension, now it is much harder for the rear wheels to slip.

The car body is solid even on bumpy road surfaces. You can still tell where the pavement is broken, where are potholes and expansion strips, however the suspension and car body absorb most of the impact energy, so you only feel a slight and refined thud.

Acceleration is brisk, most of the time it is a V6 feel, and hard to tell the power is from a 4-cylinder engine. Although this is not as quick as the hair-raising V8 GT trim, it is more than enough for your daily commute or weekend spirited spin.

Handling is vastly improved from the previous generation, majorly contributed by the new independent rear suspension. Since the location of the engine is not optimized for performance (as mentioned in “The Machine” section), it feels a little bit nose heavy (front wheels will slip) when you are making a fast sharp turn. However, this can be alleviated by using a firmer suspension setup (the EcoBoost Performance Package). 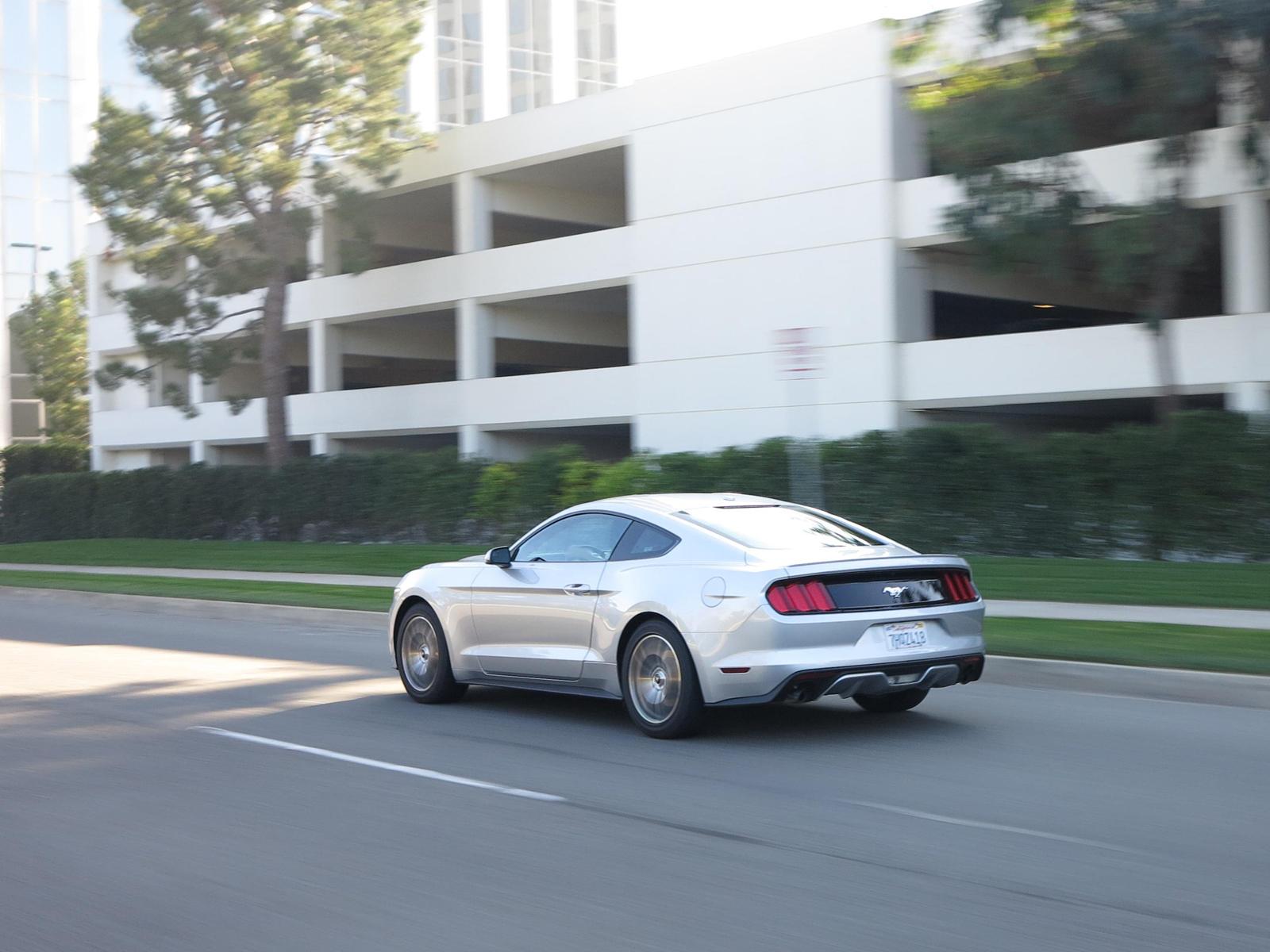 Generally speaking, I am impressed with the ride quality, performance and handling. There are also some places that Ford can do better on the Mustang, mainly in the build quality – for example something in the A pillar trim is rattling most of the time when the car is cruising on highway, and some interior panels are not aligned or has excessive gaps between them. These small hiccups will not ruin the new Mustang, however as a consumer I will be happier if the car as a whole package can be flawless inside out. 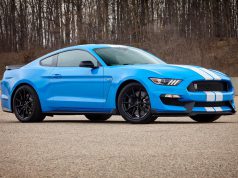 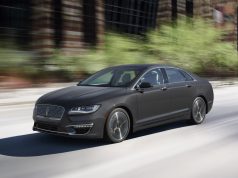