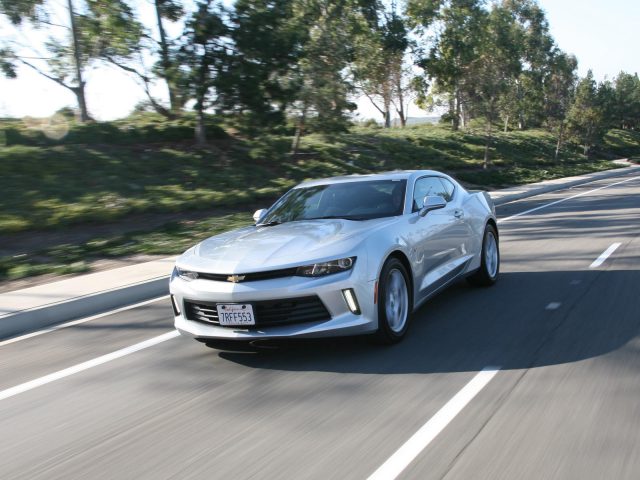 Prior to the 2016 model year, Camaro has gone through a life of 5 generations. The last 5-th gen Camaro has some aspects that obviously can be done better, major reason lies in its full-size sedan platform, which makes it too bulky and hurts the handling.

Now Chevy presents us the all-new 6-gen 2016 Camaro. When compared to its predecessor, the 2016 Camaro is a night-and-day improvement. I will explain to you why I make this conclusion in the following review.

Compared to its major competitor – the Ford Mustang, you will find the current in-stock Camaros usually carry a higher price tag, and of course, better optioned. Higher MSRP will shrink its potential customer base, which is proven by the recent sales data (for example in June 2016, Ford sold 9,776 Mustangs, while Chevy sold only 4,969 units of Camaro). 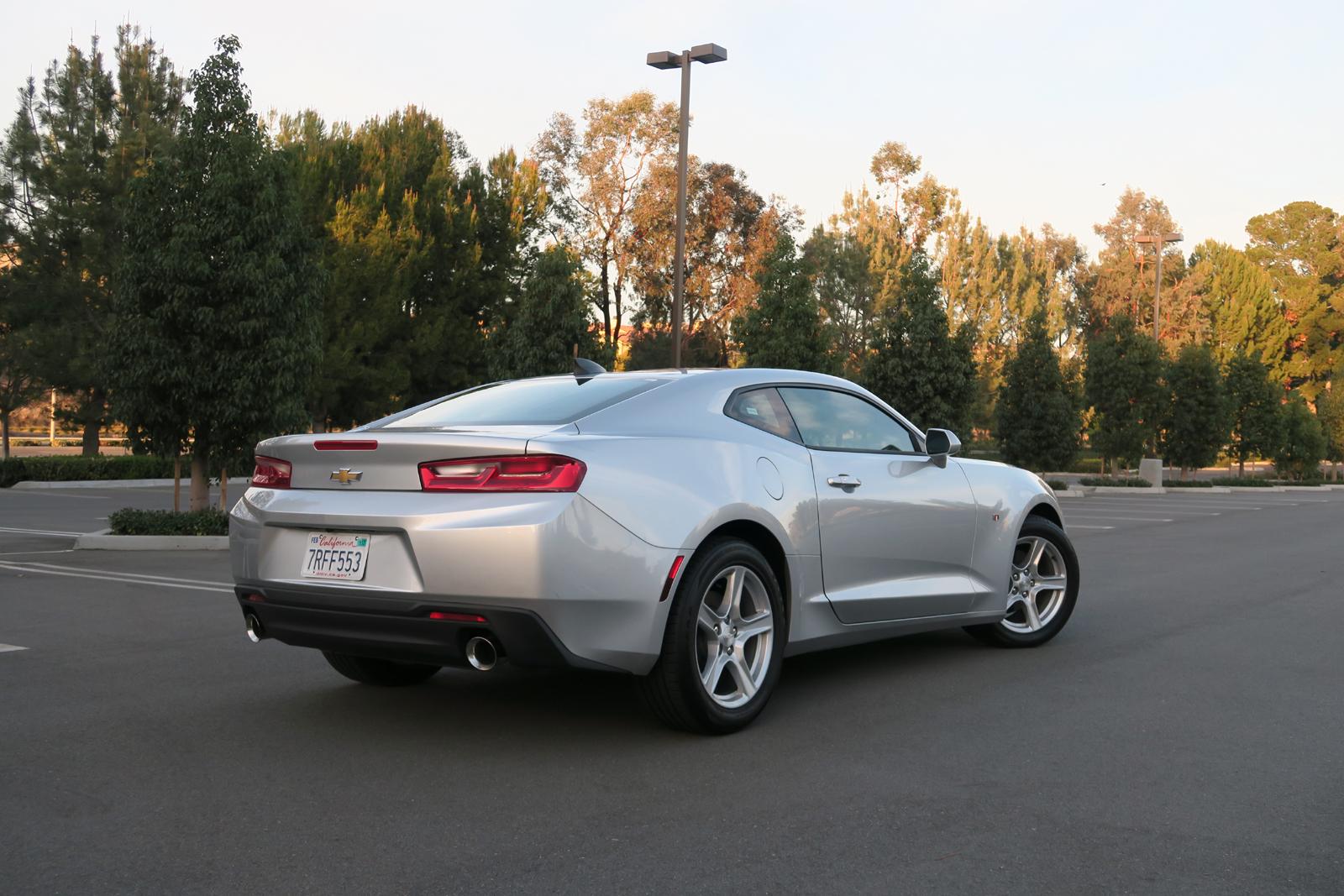 However this is not an oversight of the Detroit manufacturer. Instead, GM planned this intentionally. Major reason is GM’s relocation of its Canada Ontario factory back to Michigan’s Lansing Grand River site. The new assembling line needs time to ramp up production, and it cannot reach 100% of its capacity at this moment. Therefore lower production means higher MSRP to maintain enough profit margin. But as you can see from the below reviews, the higher sticker price will be justified in other aspects. 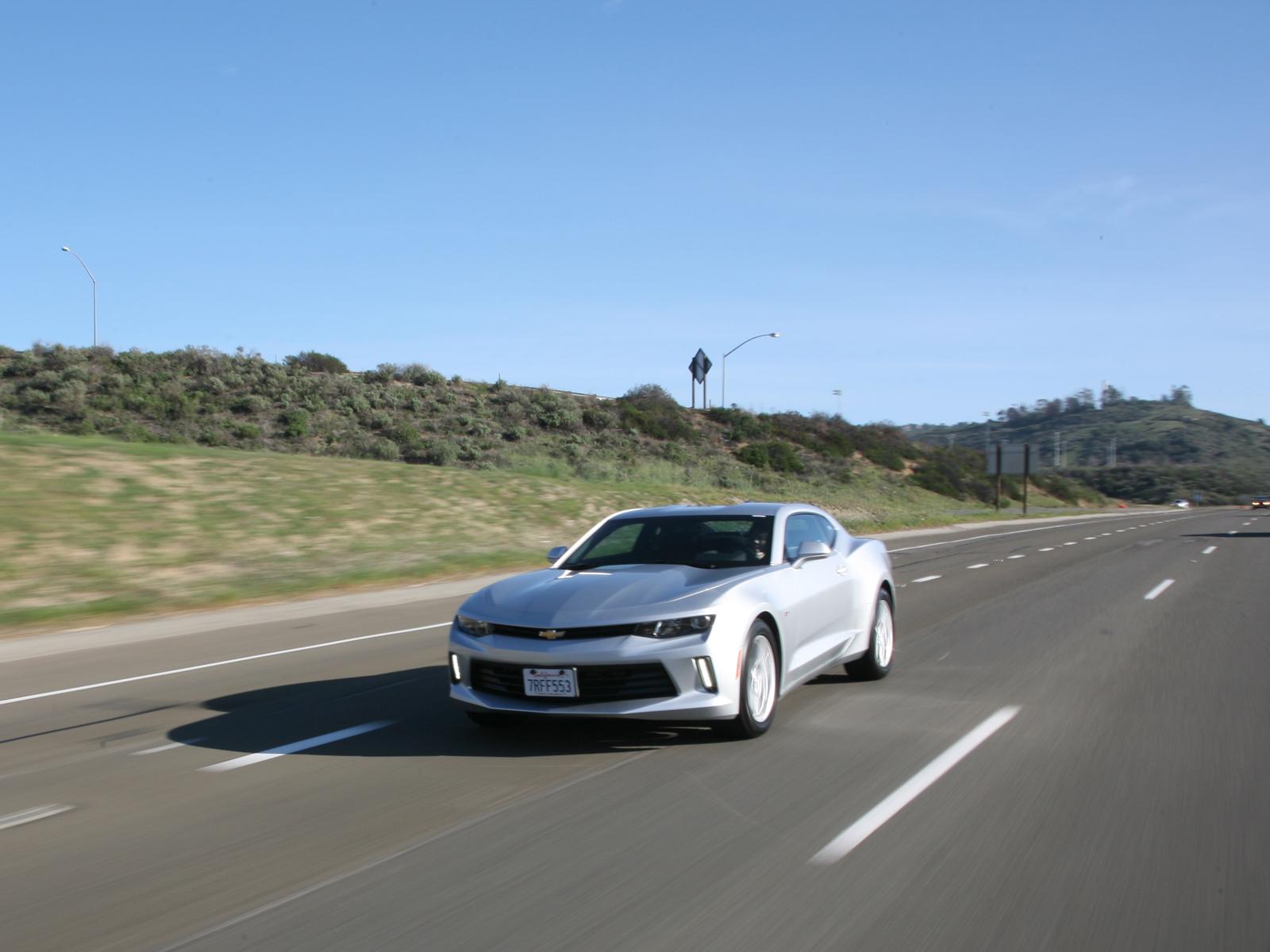 The all-new 5th-gen Camaro is revolutionary when compared to its predecessors, and also other competitors: it is based on a platform, which represents the state-of-the-art technologies.

The 2016 Camaro is built on GM’s Alpha platform, which is also shared by the Cadillac ATS and CTS. This platform is aluminum-extensive: the front strut towers are one-piece forged aluminum; the front sub-frame, control arms in the front MacPherson suspension, transmission cradle (front cross member), front bumper, dash bracket etc., are all made with aluminum. To save weight, Camaro is also using an aluminum hood too (although this is a common practice within the industry nowadays).

Such aluminum treatment is unusual in cars less than the $30k. We typically see similar design in luxury cars such as the W205 Mercedes C-class, BMW 5/7 series etc.

Since the current Ford Mustang and Dodge Challenger are still wandering at the traditional “all-steel” zone, the aluminum front structural construction provides Camaro an absolute advantages in weight distribution and chassis dynamic properties.

Because of cost considerations, the back portion of the Camaro is majorly using steel. This is totally fine given Camaro’s targeting market. In addition, this also makes it easier to achieve the goad of 50/50 weight distribution (lighter front and heavier back shifts weight backwards).

The Camaro’s front suspension is officially named as “multi-link MacPherson strut”. In fact, this is a derivative of the traditional MacPherson strut suspension, which decomposes the lower A-arm into two separate control arms. This design decreases the king-pin offset effectively, and thus improves the handling feel. You can see similar design in some “famous” sports-oriented cars such as the BMW 3 series, and also the Ford Mustang.

GM is focusing so much on the Alpha platform’s 50/50 weight distribution, that the placement of the engine is optimized with this goal too. From the below photo you can tell the V6 engine is pushed back towards the passenger cabin, and sits almost behind the front axle. Compare it with the Mustang and you will understand the difference.

In short, the above analysis can be translated with one conclusion: lighter car body and better 50/50 weight distribution makes handling more nimble, precise and responsive.

However, despite all these advanced technologies, the Alpha platform which the Camaro is riding on, may not be as rigid as you think when talking about the passive protection during a crash. From what I have known at this moment, the Camaro is highly likely to be the last model to utilize the Alpha platform (GM is moving to the newer Omega platform starting with the Cadillac CT6).

IIHS has recently tested the Camaro’s crash performance. The results are mediocre, especially the roof strength (peak force = 13,641 lbs is insufficient while most mainstream cars’ roof strength is in the 15,000+ lbs range).

Camaro is probably the vehicle that has the highest value for RWD driving enjoyment. 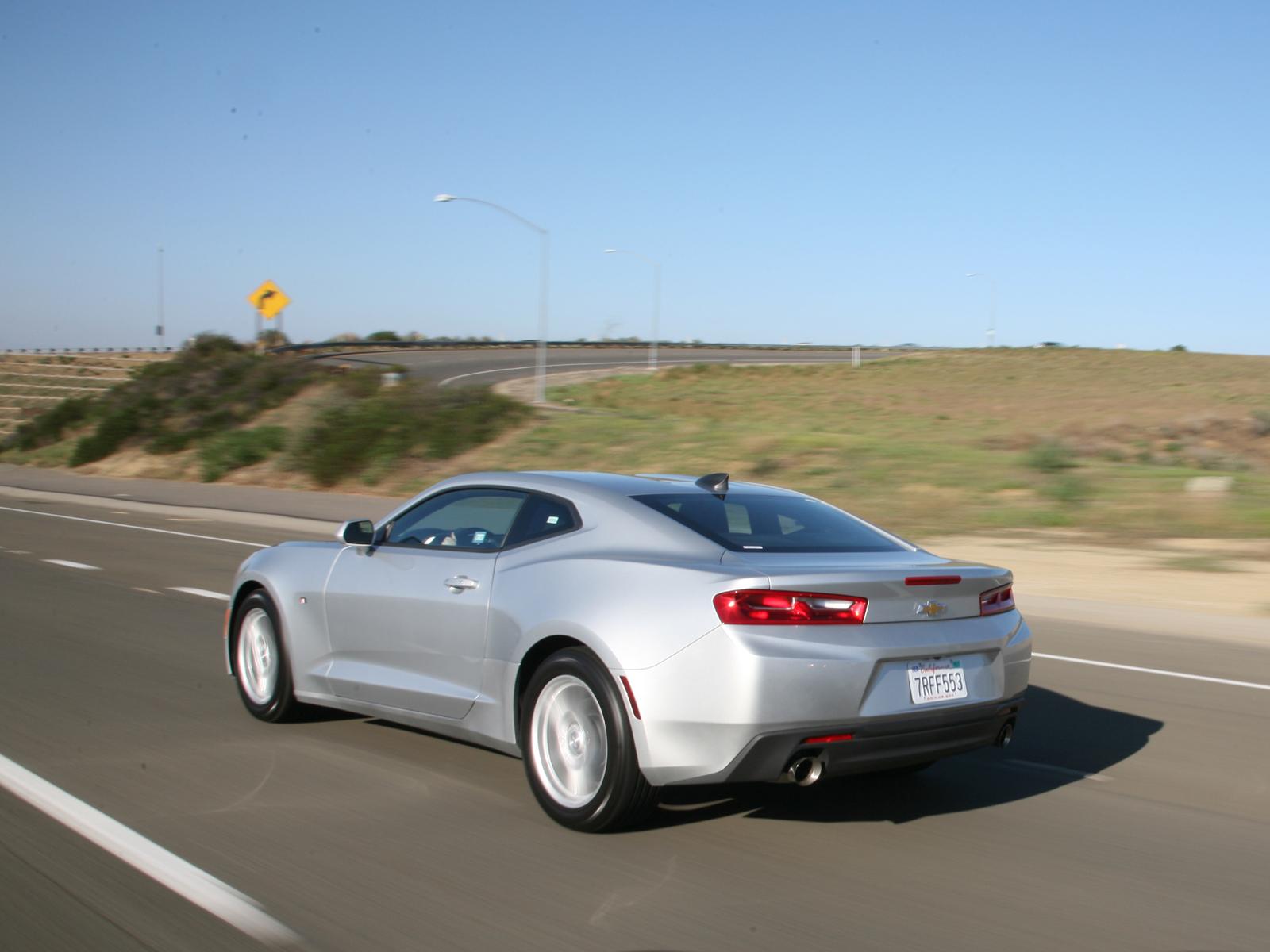 Its steering is tight and responsive, and will passionately react to your steering input even it is minimal. However, this makes the driving experience more tilted towards the “nervous” side, because you need to adjust the steering more frequently than other highway cruisers.

Suspension is firm, but the rigid car body absorbs road impacts perfectly. You can tell this when driving on highway which are poorly maintained surfaces: you can sense a slight thump when the car hit the broken pavement, but it is never harsh. The whole car body feels solid, not a single sign of loosing or flexing.

The LGX V6, which is one of the 2016 Ward’s 10 Best Engines, has a slightly larger bore and stroke than its predecessor (LFX V6).

Similar to the LFX, the LGX V6 also has integrated exhaust manifold in the cylinder head, and also the forged crankshaft.

Judging from the BMEP index, to your surprise, LGX in fact is slightly inferior to the LFX (LGX: 13.26 bar; LFX: 13.29 bar). Below are some benchmark for your comparison:

As can be seen above, the LGX’s BMEP obviously falls behind. The reason why GM engineers decided not to tune up the BMEP maybe due to the concern of carbon build up on DI engine’s intake valves (more aggressive valve timing = more prone to fuel mixture deposition).

Given LGX’s subpar specifications, how come it earns the Ward’s reward? That is because of the following 3 innovations:

Simply speaking, LGX is probably the first engine that incorporates the above three mainstream fuel-saving technologies in the industry, this makes it so unique that deserves the Ward’s reward.

On Camaro’s application, Chevrolet disables the start-stop feature on the LGX.

To provide the driver a more engaging experience, the cabin is connected to the engine intake manifold by a resonance sound tube, located between the throttle body and the firewall.

Despite of the horsepower number and fancy technologies on paper, during our test the engine does not provide enough torque in low-mid rev range. Under “normal” driving conditions, acceleration feel is not as strong as I have imagined. However this does not mean the V6 Camaro is a slow car, it is just slightly under my expectation.

The pros of the LGX is its linear throttle response (absolute advantage of the NA engine), and you will definitely feel the engine’s power potential once the tachometer needle passed the 3,500 RPM mark.

Technically speaking, it is hard to say which design is better. The final result mainly depends on the shifting logic and also the ECU software.

If you want a car with nice/luxury interior and also fancy electronic gadgets/features, then Camaro probably is not your choice. Indeed, pony car’s major value should not be in these areas.

Most of the interior panels are hard plastic, with uneven gaps in some places too. Our test vehicle is the base model with minimal options, therefore it only has very basic electronic features. But I am totally fine with this because this is what I need in a pony car.

However one small issue I found is: the angle of the central console LCD screen – it is tilted downwards, gives me a somewhat strange visual effect.

Although having 4 seats, do not consider the Camaro to be a car that is practical for more than 2 adults. The backseats has no headrest, and the headroom and legroom is very limited too. So a 10-minute ride for adults is probably OK, but definitely not for long distance road trips.

What impressed me most is its handling, considering its price tag and market position, the Camaro is unbelievably nimble and agile, you can easily do hard cornering with great confidence.

Ride quality is 1st class because of the rigid body. However, this may be partially attributed to our test vehicle’s “small” rim size and high aspect ratio tires (245/50 R18). Hence I cannot guarantee you the same experience if you opt for the upgraded 20-in wheels. 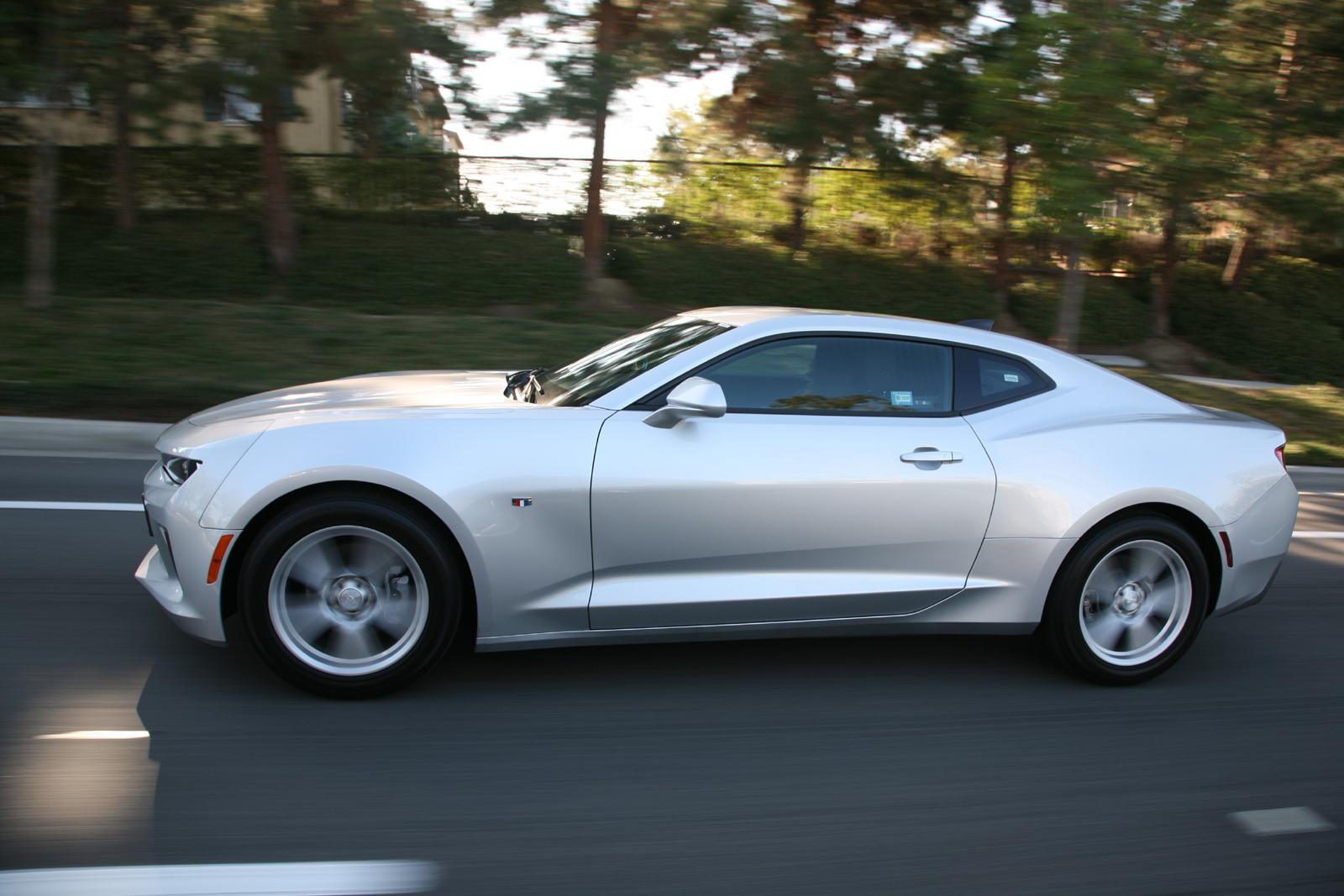 I am a little bit disappointed in the V6 powertrain: you have to push it above 4,000 RPM to wake it up. Therefore, if you are going up a steep ramp and merging into the highway traffic, during the process the transmission needs to hunt for the correct gear several times (thus introduces 2 or 3 brief shudders), before the engine can finally settle into the suitable revving range to provide satisfactory power. Setting the drive mode to “Sport” does not make a big difference in this case.

Under the Sport mode, if you floor the gas once, the transmission control logic will automatically turn on the “Performance Shift” feature, and keep the lowest possible gear as long as possible.

The “sound tube” transports and resonates most of the engine sound into the cabin, and it is really loud, especially when it is revving in high RPM. From my personal taste I find it sometimes to be too intrusive.

Regarding the cylinder deactivation, obviously Chevrolet is keeping it very conservative. In fact, it is quite hard to trigger the engine to flip into that mode: you need to coast on a leveled highway for quite a while to see it in play.

Besides the somewhat “lazy” powertrain, another major complain regarding the mechanical aspects is: the braking system on our test vehicle is extremely unstable.

Chevrolet offers a total of 3 different braking system options for the 2016 Camaro: the basic standard one, plus another two options from Brembo. Our test car comes with the basic one, which is proven to be a bad choice if you want to buy a Camaro: we conducted 12 consecutive 100-0 (kmh) braking test, and the results are:

As can be seen above, the braking performance varies greatly among different runs.

Despite the factor that the 3.6L V6 powertrain lacking a little bit of torque below the mid-low RPM range, and the reluctant shifting pattern in the 8AT, the all-new Camaro has absolute advantage over its competitors (Ford Mustang and Dodge Challenger) in the platform technology, which employs considerable amount of aluminum components. This entitles Camaro with the best handling capability in its class. So from the mechanical aspect, the Camaro is the best choice at this moment.

From a more holistic view, the new Camaro is typical example of a latest trend in the automotive industry: highly modular component and platform sharing strategy. Similar to the Volvo SPA/Toyota TNGA/Volkswagen MLB Evo platforms, the GM Alpha platform, which the new Camaro is riding on, benefits the pony car with high level of technical treatment – before its debut, can you imagine a pony car starts at less than $26k, can use an aluminum-steel hybrid framework which is still largely exclusive to luxury cars nowadays?

Here is our Standardized Realistic Factor Evaluation chart for the 2016 Camaro:

Enjoy our high-definition gallery below! 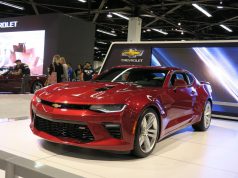