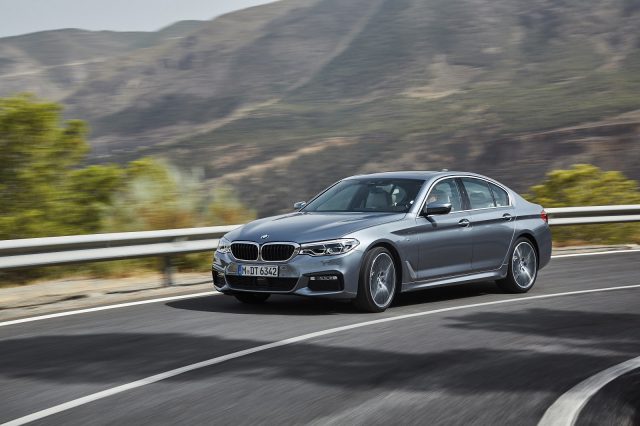 The following analysis is based on information available to us at this moment. We will continuously update the content when new information comes in.

BMW announced the all-new G30 5-Series last week. From documents they have published so far, we gain some insight of the Bavarian firm’s new mid-size luxury sedan, and are able to perform an in-depth comparison between the G30 and the current F10 5-Series.

The current F10 5-Series shares most of its structure and framework with the F01 7-Seires. Fundamentally their similarity is so high that, they are considered to be just different in sizes.

However this is no longer the case for the upcoming G30 5-Series. The gap between the G30 5-Series and the G11 7-Series are dramatically widened, mainly in how their car body are constructed.

The G30 5-Series is still using the aluminum-steel construction, while the G11 7-Series employs the exotic “carbonfiber core” approach in its major load-bearing body-in-white components.

Therefore, we can consider BMW is re-positioning the 5/7 product line to target their corresponding market more effectively – the new 7-Series attains more technologically advantages than the 5-Series, and thus have a more upscale feel; at the same time, the new 5-Series is more focusing on luxury features and practicability which many typical 5-Series buyers are caring about. Therefore, from a holistic aspect, the all-new G30 5-Series:

In the following I will present some details on each item.

The G30 5-Series is larger in every exterior measurements than the F10 generation. The increasing in size is mainly for the rear seat space. BMW claimed the G30 5-Series has noticeably greater rear headroom and legroom than the current F10 5-Series.

First let’s take a look at the F10 5-Series. Although it got very good results in IIHS tests, the highest strength steel the F10 generation uses is “only” rated as >900 Mpa in yield strength.

The F10 5-Series’ body uses aluminum-steel hybrid materials: the strut tower, engine hood, front quarter panel, doors are made with aluminum, the rest of the body-in-white are steel.

When we we look back further, compared to the E60, the F10 give me an impression of somewhat “going backwards”. On E60, the whole load bearing structure in front of the passenger cabin is completely aluminum, not just the strut tower in the F10. In fact, only 2% of the F10’s body shell are aluminum (as shown in the above illustration).

On the G30 5-Series, the average strength of the steel is also enhanced, usage percentage of the ultra-high-strength steel is increased significantly, especially in the engine bay bulkhead and front sub-frame extension.

Structurally speaking (not counting the outer skins), only the strut tower in the current F10 5-Series is made with aluminum. In the G30 platform, not only the strut tower, but also the main front frames, and also the rear members are using aluminum too. A big step forward!

According to BMW, the G30’s car body static torsional rigidity is better than the current F10 generation.

For the G30, it keeps the same design, see below:

The rear suspension is another story: the current F10 is using the H-arm design, this type of suspension can be found in cars as expensive as Ferrari, or as affordable as the Ford Fusion, Mustang etc.

On the G30 5-Series, it is totally different: its rear suspension uses the “traditional” 5-link design.

This brings up a question: why the G30 generation gives up the H-arm design, and replaces it with the more traditional 5-link style?

For the F10’s H-arm format, its advantage is mainly in easy packaging – since it requires less control arms above the wheel hub. However when compared to the 5-link design, its ability to optimize wheel movement is slightly inferior.

G30’s 5-link design is more easier for engineers to fine-tune the wheel’s movement (at least, in theory). Therefore, given the same effort, 5-link suspension provides a slightly higher ride comfort level. This is also exactly the same reason why the H-arm suspension used on the Bentley Flying Spur, does not appear on the firm’s flagship Mulsanne sedan.

However there is downside too: the 5-link suspension requires more space to install, due to the extra upper control arm. You can see their difference in installation space requirements in the below illustration.

This indicates: although BMW focuses heavily on the new G30 5-Series’ luxury and practicability aspects, it still does not want to compromise with the handling and performance; and indeed, they want to improve it over the F10 generation.

For US market, during the initial launch the G30 5-Series has the following engine options:

For comparison, the following is their corresponding counterpart in the F10 5-Series:

Next let’s compare them one by one.

Across the whole family, one major distinction is their cylinder block material is changed to AlSiMgCu 0.5, while the N20/N54/N55 are using AlSi9Cu3. The former is considered to be lighter and stronger.

Another enhancement is the B series engines’ closed-deck cylinder block design, while the N20/N54/N55 are open-decked. For the advantage of closed-deck, please refer to our previous technical analysis.

Since the inline-4 layout is inherently 2nd-order imbalanced, it needs balance shafts to suppress the vibration under high RPM operation. The placement and also the way how the balance shafts are driven is totally different between the N20 and B48.

On the B48, the two balance shafts are placed on the immediate left and right hand side of the crankshaft, and directly meshed to the crankshaft.

Between the above two designs, there is no definite advantage over each other. The main reason why B48 picks this shaft placement scheme maybe due to packing (modular compatibility) and also fuel efficiency concerns.

Same as the N20, the B48 use Electric Arc Wire Spraying (LDS) to generate a thin layer coat of ferrum to act as the cylinder sleeve. This is a state-of-the-art technology, you can also see the same application on Ford’s EcoBoost engine family.

Last point worth mentioning is the N20 engine: it uses both a design (“axial offset” in short). The later is the first in BMW history. The purpose of such offsets are to decrease operating noise and vibration. On the B58 engine, it does not use such design (because of the modular strategy).

For detailed comparison, we have a very extensive review here:

Please note that the M550i will only has the AWD version, no RWD M550i exists.

There are two major changes made to the N63TU2 on top of the N63TU.

First change is the compression ratio is increased to 10.5:1 from the 10.0:1 on the N63TU. This translates to better thermal efficiency (= saving fuel).

The N63/S63 architecture uses the reverse flow design, which places the exhaust manifold on top, therefore the turbochargers are mounted inside valley of the V-bank.

Because of the uneven-firing characteristics of the V8 layout, the best way for each turbocharger to get stable exhaust airflow is: collecting exhaust gas from two banks at the same time. Therefore on S63, the two turbochargers are connected to its own cross-bank exhaust manifold respectively. This is the essence and ultimate goal of the reverse flow design.

On the contrary, this is not the case for the N63TU2. Although twin-scroll turbochargers are used, each one of them is still connected to one single bank of cylinders only. It does not get the best out of the reverse flow architecture. It is undoubtedly better than the N63TU (with only single-scroll chargers), but it is fundamentally inferior than the S63.

Apparently, BMW does this intentionally. The only explanation is: to preserve the brand’s high-end M cars’ absolute advantage over other “normal” models. Think about this: if the engine of the M550i is almost mechanically identical to the M5, given the M5 has a much higher MSRP, few people are willing to buy the M5.

With less power output, the reason why the 2017 M550i can outrun the top-breed M5 can be attributed to multiple causes:

Compared to the mechanical component, the electronic features evolves at a much faster pace. Even a fully loaded F10 5-Series is still missing some functionalities which a luxury car should have in 2016.

So the all-new G30 generation gets a ton of such new features, which descriptions occupies more than half sections of the press release.

For example, the new 5-Series now can steer by itself (lane keeping, lane control assistant), automatic lane change, the seats can have massage function, HUD display is 70% larger than before (which almost effectively projects the instrument cluster info onto the windshield). The car is even smart enough to warn you if you accidentally entered an one-way road in the wrong direction.

Of course, the UI of the iDrive system is overhauled, it looks more beautiful and modern. Not to mention the gesture control feature, which you do not need to physically touch the screen to operate the system.

Outside, LED headlight is now standard (although you can opt for the “Adaptive LED” package to get more fancy light patterns).

From my point of view, these “bells and whistle” things do not make a car mechanically better or worse; but at least, most consumers need them, and I bet quite a lot of them even place this at the top of their lists.

If from F01 to G11 7-Series can be called a “revolution”, the F10 to G30 5-Series should be more accurately to be categorized as an “evolution”.

It has take big steps forward in some areas (for example more lightweight/advanced materials in the body construction, latest engines, electronic features), the upgrade is just not as dramatic as its big brother 7-Series (the “carbon core”!).

In the press release, I cannot find air suspension is mentioned. This makes the Mercedes W213 E-Class more attractive if a consumer want the air-ride quality. However, the G30 5-Series compensate this by offering V8 engine in non-M model (for Mercedes, the only way you can get V8 is going to the AMG models).

Therefore, the major selling points for the upcoming new 5-Series are: 1. technology; 2. performance. These are BMW’s roots indeed. 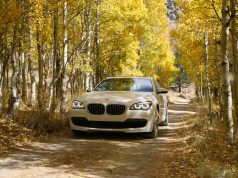 BMW 750i and the Fall Color 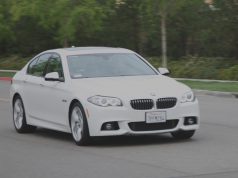 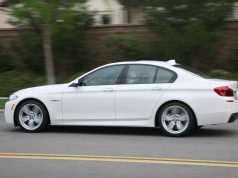